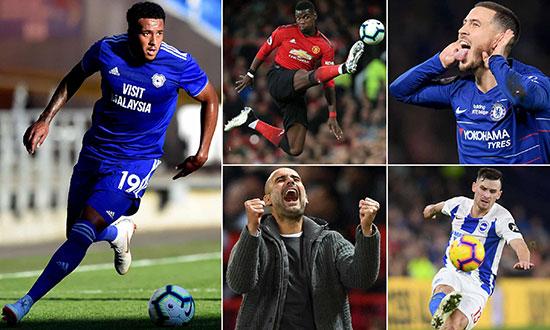 A chance for Shaqiri to shine, City may need to show their dark side and Cardiff can pile pressure on Brighton

Nathaniel Mendez-Laing impressed against Liverpool, Pogba and Hazard face off, Pep Guardiola’s side can win ugly now, and a Brighton rejig could help the side. Composite: Getty Images, Reuters

1) City must roll up their sleeves again at Burnley

Pep Guardiola is not usually short of post-match praise for his players, but he struck a different note after the Manchester derby win. “Tonight we can enjoy it, but tomorrow it’s over, so we have to be focused,” he said. “I know people are going to talk about how beautiful, how handsome we are, but now we have to go to Burnley”. Guardiola is rightly taking nothing for granted even after taking the necessary six points from Spurs and United. Burnley were one of six teams to take points off City last season and have routinely posed problems for the top six this term. It is to City’s advantage that they have been winning ugly for a while. The 6-0 thrashing of Chelsea in February was perhaps the last time City were at full throttle in the league, but the wins have kept coming, drawn out through force of will. Guardiola’s handsome team will need to show their dark side again on Sunday. NM

Xherdan Shaqiri has played 19 minutes of football for Liverpool since 4 February. It’s a bit of a headscratcher that, as fixtures piled up in February and March, he was not used more – especially given his telling contribution over the congested period in December and January. One explanation is that with five industrious central midfield players in good form vying for three spots, opportunities in a deeper role have been limited. Shaqiri is not as hard-working as any of the front three either but a game late in the season – as important as it is – against a relegated team would appear to be the perfect one for Shaqiri to come in and give one of Sadio Mané or Mo Salah some time off before Wednesday’s trip to Barcelona. He was Liverpool’s chief creator in October’s away win at Huddersfield. Perhaps it is time for Klopp to use his man-management skills and challenge Shaqiri to prove himself a worthy backup option from a starting role again. GB

3) West Ham can rise from their torpor to test Tottenham

Tottenham have a four-point cushion to fifth place and the prospect of a Champions League semi-final first leg against Ajax to savour. Anyone might forgive a wavering of focus, particularly when their resources are sufficiently stretched that Vincent Janssen got a runout against Brighton, and a derby with West Ham does not seem the kind of sedate affair they might have wished for 72 hours before their big night. Manuel Pellegrini’s side are reliably infuriating but since a fine mid-season run their form has plummeted. They have won three times in 13 league games since defeating Arsenal and anyone who did not know better might think Marko Arnautovic’s winter come-and-get-me plea to China has had a deleterious effect. Yet West Ham rarely give Spurs an easy ride; last season it needed a late Son Heung-min leveller to deny them victory and the year before a dramatic double from Harry Kane in the dying moments turned the outcome right around. Saturday lunchtime’s meeting is, to all intents and purposes, the only thing West Ham have left to hang onto this season and they may extend their opponents inconveniently yet again. NA

4) Cardiff to stay bold and heap pressure on Brighton

Cardiff can turn up the heat on Brighton by going level on points with them just minutes before Chris Hughton’s side kick-off against Newcastle at the Amex on Saturday. It’s an opportunity they can’t afford to pass up and, after impressing on the counterattack against Liverpool, they should be similarly bold at relegated Fulham. Nathaniel Mendez-Laing was impressive in the first half against Liverpool, causing Trent Alexander-Arnold problems with his jet-heeled bursts up the left wing, while Junior Hoilett was adventurous on the right. Against the worst defence in the league, Cardiff should not be shy about using their wide men to drive them forwards in pursuit of survival. GB

5) Long to find range again and seal safety for Saints?

Southampton may still require a win before they can relax, but their resurgence under Ralph Hasenhüttl has been remarkable. After two defeats as the Austrian found his feet, Southampton have collected 28 points from 17 games – not far off their peak form under Ronald Koeman. This has been achieved after a January window with no new arrivals and big names sent packing, including Wesley Hoedt, Cédric Soares and Manolo Gabbiadini. Hasenhüttl has brought Yan Valery and Jan Bednarek into the team, and wrung more quality and effort from his experienced players, not least Shane Long. The forward ended his 279-day scoring drought in January and hit a much happier landmark on Tuesday with the Premier League’s fastest ever goal. If would be fitting if he were to find a winner that may secure survival. NM

6) A final Pogba-Hazard face-off in the Premier League?

There are many similarities between Paul Pogba and Eden Hazard – both talismanic presences, their swagger or lack thereof often spreading to teammates, their futures a matter of relentless debate. Their peers have judged that only Pogba merits a place in the PFA team of the season, a selection that has raised eyebrows. That a Champions League place is still attainable for their teams – in Chelsea’s case, via two different routes – is remarkable after such turbulent campaigns, but both players are capable of completing the job. If either – or both – sides do make it into the European elite, there’s a chance neither man will be around to take part, as both clubs balance the need for rebuilding funds (Chelsea’s transfer ban notwithstanding) with the potential loss of a superstar. It feels like this will be the last time, for now, that these two spotlight-hogging heavyweights will face off in the Premier League. That alone makes Sunday’s encounter worth watching. NM

7) Another chance for Arsenal to lift their intensity

“It is not time to have excuses,” the Arsenal defender Sokratis Papastathopoulos insisted after their negligent performance against Wolves. In virtually the same breath he mentioned their opponents were “very good at what they do, the counterattack” and it is the sort of faint praise that has so often left Arsenal lips when they have fallen short. A brutally honest assessment would be that the current crop simply are not good enough. Sokratis was right to say a repeat showing at the King Power Stadium would see them torn apart and perhaps Unai Emery should encourage them to play with the intensity they have mustered for games against fellow top-six sides. With Manchester United and Chelsea facing each other later on Sunday, Arsenal have another chance to occupy the driving seat. NA

8) A tantalising reunion in battle for seventh at Watford

Arsenal’s supporters found some entertainment at Molineux on Wednesday by singing “2-0 and you fucked it up” in reference to Wolves’ disappearing act in the latter stages of their FA Cup semi-final. The reunion with Watford at Vicarage Road will certainly ensure some unpleasant memories are kept fresh for Nuno Espírito Santo’s side. That win over Arsenal appears to have cleared their heads after a low-key reaction to their Wembley blow and following it up would make their claim to seventh place – and a probable Europa League spot – look irresistible. Watford sit a point behind them in eighth and whoever holds their nerve on Saturday could go on to claim the best-of-the-rest chalice. Both teams show a refreshing lack of fear and marry steel with adventure; perhaps the dread-stricken contenders for fourth place could learn a thing or two. NA

Brighton’s plunge into relegation trouble has coincided with a dramatic collapse in their home form. Before February, Leicester were the only team outside the current top four to have won a league game at the Amex. Burnley, Bournemouth, Southampton and Cardiff have all won there recently. It’s tempting to blame nerves, but Chris Hughton’s switch to a 4-3-3 formation may be equally the issue. Brighton have become defensively vulnerable at the Amex without increasing their attacking threat. Pascal Gross and Glenn Murray have seen their influence diminished and Murray is without a home league goal since December. Switching Gross back to a supporting role, or deploying a second striker, could be key to securing a vital home win with games against Arsenal and Manchester City to come. NM

If Everton’s ambition at the beginning of the season was to sneak into the top six, par was nothing less than seventh and possible Europa League qualification. After a shaky run from the turn of the year that threatened Marco Silva’s job, the Toffees have finally found form, ending a run of 25 games without beating a top-six club. Arsenal, Chelsea and Manchester United have recently been toppled by hard-pressing. The superb 4-0 win against United was eerily similar to the win against Manchester City by the same scoreline at Goodison Park in January 2017. In the next game they travelled to Crystal Palace and won. Everton face the same fixture again this weekend. If they again press with intent, Palace will struggle and history could repeat itself. Victory at Selhurst Park would bring up a haul of 15 points from a possible 18 in their last six games. It would also make a par finish and a possible return to European football likely after a turbulent campaign. GB