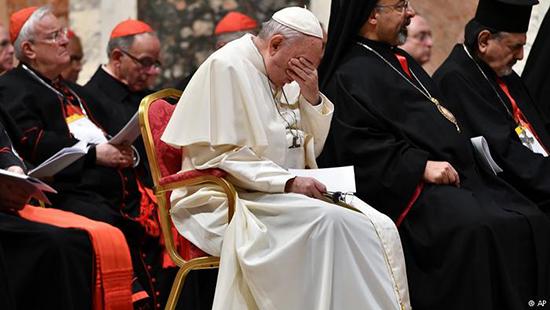 Argentinian-born Pope Francis has made support for immigration a pillar of his pontificate and has repeatedly encouraged nations around the world to welcome migrants rather than stigmatise them. Pope Francis has sent 500,000 dollars to help migrants in Mexico who are attempting to enter the United States, Vatican News reported. The funds will reportedly be distributed among 27 projects advanced by 16 Mexican dioceses and religious congregations, which asked for assistance to provide food, lodging, and other necessities to the migrants. “In recent months, thousands of migrants have arrived in Mexico, having travelled more than 4,000 kilometers on foot and with makeshift vehicles from Honduras, El Salvador, and Guatemala. Men and women, often with young children, flee poverty and violence, hoping for a better future in the United States. However, the U.S. border remains closed to them”, said a press release from Peter’s Pence, the organisation handling the funds. According to Peter’s Pence, these migrants “were stranded, unable to enter the United States, without a home or livelihood”, that is why the Catholic Church hosted “thousands of them in hotels within the dioceses or religious congregations, providing basic necessities”, including lodging and clothing. The article likewise points out that the migrant caravans are no longer in the media spotlight, which has allegedly caused decreased government and private financial assistance to migrants. Earlier this month, the pontiff said that migrants bring with them the wealth of a multicultural and multi-ethnic world, and urged host nations to not be “afraid” of them. “Let us thank God for a multi-ethnic and multicultural society because dialogue among cultures, persons, and ethnicities is richness. We must not be afraid of the water of life, of this multiethnicity, of this multiculturalism and here I touch on a sore topic: don’t be afraid of migrants. Migrants are those who always bring us riches. Europe itself was made by migrants! The barbarians, the Celts… all these came from the north and brought their cultures with them. Europe grew in this way, with the contrast of cultures”, he told students and faculty of the San Carlo school of Milan. The news comes shortly after US President Donald Trump reiterated threats to close part of the US-Mexico border if Mexico doesn’t take acton to stem the flow of illegal migrants headed north. On 31 March, Pope Francis criticised Trump over his proposed border wall, saying that his decision would leave the United States a “prisoner” of its own isolation. “He who raises a wall ends up a prisoner of the wall he erected. That’s a universal law in the social order and in the personal one. If you raise a wall between people, you end up a prisoner of that wall that you raised. We need bridges and we feel pain when we see people who prefer to build walls”, he said. Caravans of migrants from Central American countries have been moving toward the United States through Mexico despite the government’s attempts to curb the tide. The Trump administration has on a multitude of occasions claimed that gang members as well as drug smugglers are trying to cross the US border with other illegal aliens. In particular, Trump has singled out members of the notorious MS-13 gang, which is comprised of immigrants from Central America, and is actively operating in the United States. Mexican Interior Minister Olga Sanchez Cordero has said that if the current migration flow remains unchanged, the number of migrants trying to get through Mexico to the United States will reach 900,000 people by the end of this year. Last month, Trump declared a national emergency and requested $32.5 billion in funds for border security next year, including $8.6 billion for the wall, insisting that the barrier is needed to prevent criminals from crossing into the United States. Sputnik