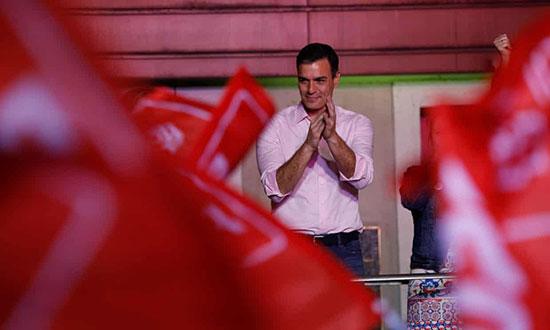 Spain’s ruling socialists won the most votes but fell short of a majority in Sunday’s snap general election, a contest marked by the breakthrough of the far-right Vox party and a disastrous performance by the country’s traditional conservative party.

Despite it being the country’s third general election in under four years, turnout was 75.8% – well up on the 66.5% two years ago.

Sánchez hailed the result and the high turnout as proof of Spain’s desire to move forward and reject the reactionary policies of some of his rightwing opponents.

“We made it happen,” he told supporters in Madrid, echoing the PSOE’s campaign slogan. “We’ve sent out the message that we don’t want to regress or reverse. We want a country that looks forwards and advances.”

However, the PSOE will still need to seek the support of other parties to reach the 176 seats necessary to form a government in Spain’s 350-seat congress of deputies.

Even with the support of Unidas Podemos and related groups, it would still be 11 seats short of a majority and would need the help of smaller regional and nationalist parties.

Podemos’s leader, Pablo Iglesias, has already shown enthusiasm for a deal with the PSOE. He said that while his party would have liked a better result – it dropped 29 seats on the last election – “it’s been enough to stop the right-wing and build a left-wing coalition government”.

The PSOE’s triumph – it picked up 38 more seats than at the last general election in June 2016 – came amid the continuing fracture of the Spanish right.

Vox performed slightly below expectations, but has still managed to become the first far-right grouping to win more than a single seat in congress since Spain returned to democracy after the death of General Franco in 1975.

The PP, by contrast, experienced its worst ever results as its support collapsed and it haemorrhaged 71 seats. Speaking before the vote, the party’s leader, Pablo Casado, had called the election the country’s “most decisive” in recent years.

Although Casado had ruled out resigning in the event of a poor showing, the pressure on him will be mounting as the party conducts its own post-mortem on his failed strategy of trying to outflank Vox and Citizens by lurching further to the right.

The PSOE’s victory was described as an “ephemeral” one by Vox, whose far-right MPs are headed for congress.

The party’s leader, Santiago Abascal, said Vox had lived up to its promise to begin what he called “a reconquest of Spain” – a reference to the long campaign against Moorish rule, which concluded in 1492 and also culminated in the expulsion of Spain’s Jews.

Who’s who in the world of Spanish politics?

Sánchez called the election in February, after Catalan separatists joined rightwing parties in rejecting his 2019 budget.

The PSOE has governed Spain since last June, when it used a no-confidence vote to oust the corruption-ridden PP from office.

But Sánchez’s minority government had struggled to advance its legislative agenda as it held only 84 of the 350 seats in congress.

The prime minister’s opponents accuse him of being weak and too beholden to the Catalan independence parties that supported his successful no-confidence motion. They argue he should take a far tougher line on the independence issue, which has dominated Spanish politics since the regional government’s secession attempt in autumn 2017.

The territorial crisis has also fuelled the emergence of Vox, which until last year was a fringe party without the support to win seats in congress. That changed last December when it exceeded expectations, picking up 12 seats in the Andalucían regional election.

Vox then demonstrated its abilities as kingmaker by agreeing to support an Andalucían regional government between the PP and Citizens, which ended decades of PSOE control in the southern Spanish region.

Vox’s uncompromising stance on Catalonia, which includes proposals to ban pro-independence parties, has helped it build momentum, as have its attacks on feminism and what it describes as political correctness.

The party has succeeded in shaping the political agenda in recent months as the Spanish right continues to fragment. Both Casado and Rivera, the Citizen party’s leader, have steered their parties away from the centre in an attempt to stop voters deserting them for Abascal’s grouping.

Sánchez had warned the party could then try to repeat its Andalucían strategy to build a three-party rightwing coalition government with the PP and Citizens.

“No one thought that Trump would be president in the US, nor Bolsonaro in Brazil,” Sánchez tweeted on Friday. “And people reckoned Brexit wouldn’t happen either. A vote for the PSOE is the difference between a Spain that looks towards the future and a Spain that slides back 40 years. No one should stay home on Sunday!”