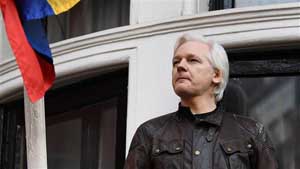 Wikileaks founder Julian Assange has filed a criminal complaint in Ecuador, accusing the diplomatic staff at the London embassy of spying on the whistleblower before leaking illegally obtained data to a third party for extortion.

Lenin Moreno’s government violated Assange’s privacy by secretly recording the journalist’s daily activities starting from March 2018, said a complaint submitted Monday to the attorney general’s office in Ecuador on behalf of the whistleblower. It says the spying was conducted with the help of Promsecurity, a private contractor firm which administers electronic surveillance at the Ecuadorian embassy in London.

Naming three officials of the diplomatic mission, including Ambassador Jaime Marchán, as well as four members of Promsecurity, the complaint alleges that the government violated at least four counts of domestic law by illicitly monitoring Assange’s activity. Those involved apparently tried to extort €3 million from WikiLeaks threatening to publish audio, video and personal documents of Assange unless they get paid. Ecuadorian law provides penalties of up to five years in prison for each violation mentioned in the complaint.

The matter is “very sensitive and complicated” Ecuadorian lawyer Carlos Poveda told reporters after filing the case in Quito, asking for the judiciary to investigate the case. The lawyer did not reveal to whom the Australian’s personal information had been leaked to, but noted that that the Spanish authorities are already investigating the extortion scheme.

The allegations outlined in the legal document contradicts the version of events presented by President Moreno who accused the whistleblower of trying to set up a “center for spying” in the embassy before suspending Assange’s asylum on April 11. WikiLeaks denied the claims, saying that Moreno sought personal revenge over the recently surfaced corruption allegations against him.