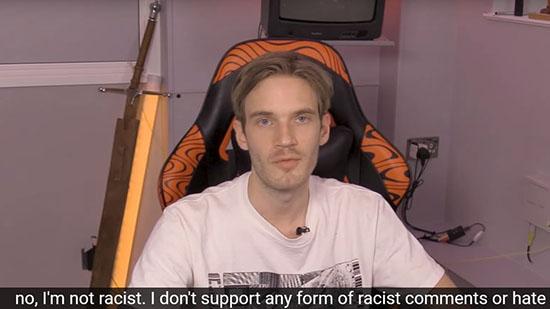 The liberal establishment would love nothing more than to “cancel” YouTube’s most popular personality for being a closet Nazi, but PewDiePie presents a moving target – and they have every right to fear him.

The latest video PewDiePie, the alias of 29-year-old UK-based Swede Felix Kjellberg, delivered to his 95 million subscribers provides an excellent illustration of why critics find him so hard to pin down.

The three-minute missive addresses his responsibility for the Christchurch shootings earlier this month, during which the shooter’s last recorded words before unloading his weapons were “Remember lads, subscribe to PewDiePie.”

PewDiePie is sat down in his usual home studio that looks no different to a teenager’s bedroom, he is wearing a bland white t-shirt, is well-spoken and looks directly into the camera, never breaking eye contact.

His words are conciliatory – he “disavows” any violence connected to him, says he has been “affected in more ways than he has shown” and adds that he “doesn’t want hate to win,” using the very language liberal politicians tend to deploy in the aftermath of such attacks.

He is not just less threatening than some would-be demagogue pumping his brownshirt army full of invective, but diametrically opposed in his demeanor “own the libs” alt-right stalwarts, or Fox News hosts. Jordan Peterson scares more with his mild-mannered earnestness.

Not only that, the headline subject of the recording, in which he calls for the end of the “Subscribe to PewDiePie” campaign that has now been tainted by the Christchurch association, is so arcane to anyone outside of the YouTube bubble as to be almost meaningless. One would assume that by the time a real fascist would have amassed that many followers, they would have set their sights… bigger. Not to mention that there hasn’t been a single dictator in power whose adopted name is a testament to his love of shooter games and baked goods.

But to the authors of hundreds of articles written about him over the past two years, all this is a front.

A roll of PewDiePie’s crimes is endlessly republishedand added to: he blurted out the “n-word,” he paid some poor Indian men $5 to hold up a sign reading “Death to all Jews,” dressed up as a Nazi, listened enraptured to a speech by the Fuhrer, recommended a series of anti-Semitic blogs, and recently recorded a “diss track” featuring a panoply of cultural insults directed at Indians “from Bombay to Bangladesh” (yes, he knows).

His critics say that framing these as jokes gives Kjellberg plausible deniability while “normalizing” far-right discourse, especially among the more genuinely extreme members of his audience – hence the oft-cited endorsement of PewDiePie by the Daily Stormer. His charity efforts provide him cover, his heartfelt apologies are always delivered with two fingers crossed behind the back, and he is forever nodding and winking at his audience as he dog-whistles.

This author believes that such a reading misrepresents the hazard posed by Kjellberg to the establishment.

There is no shortage of trolls and edgelords on the internet – people who delight in saying the unsayable just to get a reaction. If that’s what he is, it would also place PewDiePie squarely in the tradition of Lenny Bruce and other boundary-setters of free speech, who eventually get lionized by polite society for upholding its fundamental values.

Fascists, both crypto and proud aren’t that rare online either, and if he were one, he would be easier to disarm. Unless we believe that they are there for the white supremacy, tens of millions would baulk and flee his channel if they thought PewDiePie held those abhorrent beliefs, while expelling him from the mainstream social media space would be more straightforward than what has been done to Alex Jones.

No, it’s more subtle. A disclaimer here: I have not watched anything but a small fraction of the 3,800 videos on his channel, nor do I know him personally, and there genuinely is a cultivated opaqueness to Kjellberg that make him something of a Rorschach test for his audience.

Just joking – or is he? ©  YouTube/PewDiePie

But a thread certainly runs through his content that his regular viewers cannot fail to pick up on. And it is not the big stunts, but rather a drip-drip of seemingly throwaway passages or short skits that nonetheless put forward a coherent worldview.

And that is a rejection of dominant left-liberal ideals: discussions about the value of migration, a questioning of feminist values promulgated as dogma on the internet, frank talk of race, assaults on how settled climate science is, and sideways half-endorsements of Donald Trump. If one had to estimate, the views of Kjellberg – the son of two corporate executives, incidentally – appear to be somewhere in the right-wing, libertarian anti-SJW neighborhood. And he is not just condoning or sharing – he is saying these things himself, qualified or not.

These snippets will not get the newspaper headlines, and the pattern can be lost outside the lengthy “Pewdiepie Dropping Redpills” compilations that in themselves have only hundreds of thousands, not millions of views.

But for PewDiePie’s audience that skews young, male and Western these messages that they will rarely hear inside educational establishments, Hollywood films, or mainstream media will make them prick up their ears. And in an era where cultural battlegrounds are life-changing as the explicitly political, here he really is providing an anarchic, unpoliced platform for otherwise sackable, yet popular views. As the rapid rise of the various alternative right parties indicates, compared to the niche appeal of the genuine swastikas-and-Jewish-Question far-right, this is fertile ground, and there is no guarantee that young minds will share the centrist consensus of the current middle-aged political class. That the youth has to get its ideology from a man who became famous for screeching during video game playthroughs is perhaps an indictment of political education in the West – but there is nothing weird about that if you are seventeen.

All this makes PewDiePie not the new Goebbels but rather a subversive anti-Jimmy Kimmel – someone using an entertainment vehicle to push forward a broadly political agenda. There is no way someone with that profile could get an evening network show in the US or Western Europe right now, yet his reach already exceeds that of any traditional media program by many times, reaching a receptive demographic no one else does as effectively.

Thus, the attacks will not cease. For the moment, he is buffered by his millions of fans, but the so-far unrepentant Kjellberg is in a precarious position. However much as he can try to disguise his views, there will be more controversies to come, either as a result of his own slips, or manufactured by his adversaries. He relies on his corporate overseers at YouTube to defend him. One day they may not.