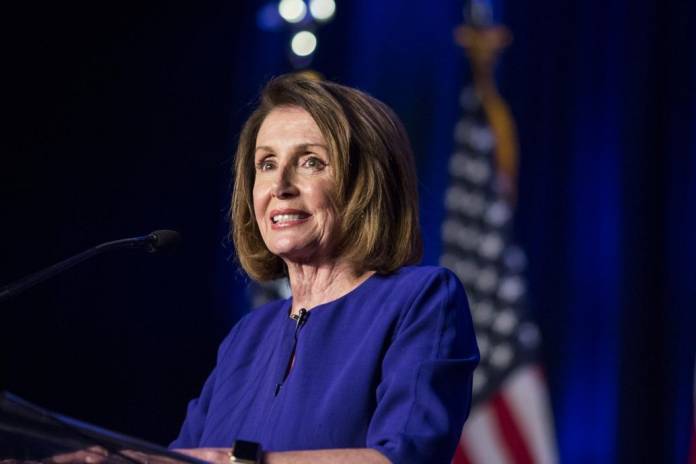 House Speaker Nancy Pelosi told reporters Monday night that President Trump “has demonstrated on a daily basis his obstruction of justice” amid a conflict between the White House and Congress over the terms of scheduled testimony by Attorney General William Barr before the House Judiciary Committee.

Barr is scheduled to testify before the Senate and House Judiciary panels this week on Special Counsel Robert Mueller’s report. However, the Justice Department informed the House committee on Sunday that Barr would not attend the scheduled Thursday hearing if committee lawyers seek to question him.

When asked if she had a message for Barr Monday evening, Pelosi said: “Respect the constitution. Honor your oath of office. Honor the request of Congress. For the American people.”

It is unusual for committee counsels to question a witness. But committees can generally make their own rules, and other panels have made similar exceptions. Democrats scheduled a committee vote for Wednesday on a proposal to allow both parties to turn over 30 minutes of questioning per side to staff lawyers. The Justice Department and committee Republicans have balked at this arrangement.

“The Attorney General agreed to appear before Congress,” Justice Department spokesperson Kerri Kupec said late Sunday. “Therefore, Members of Congress should be the ones doing the questioning. He [Barr] remains happy to engage with Members on their questions regarding the Mueller report.”

In response, House Judiciary Committee Chairman Jerrold Nadler, D-N.Y., told reporters that “it’s not up to anybody from the executive branch to tell the legislative branch how to conduct our business” and warned that the panel “will take whatever action we have to take” if Barr does not attend Thursday’s hearing, an apparent reference to a subpoena.

For his part, Trump vowed last week that his administration would be “fighting all the subpoenas” issued by congressional Democrats in various investigations, including bids to obtain the president’s tax returns, his business’ financial records and testimony from former senior aides.

“The only way they [Democrats] can luck out is by constantly going after me on nonsense,” Trump told reporters Wednesday. “But they should be really focused on legislation.”

House Democrats have subpoenaed the Justice Department for the unredacted version of the Mueller report and underlying material gathered from the investigation. In response, the Justice Department has said they will make the full report, minus grand jury material, available to a limited group of members — an offer that Democrats have so far refused. The dispute could eventually end up in court.

Pelosi has suggested that Congress will have more to say on impeachment after lawmakers — and the American public — digests the full findings of the years-long probe of Russian interference in the 2016 election and possible obstruction by Trump.

Democrats have criticized Barr for drawing his own conclusion that Trump did not obstruct justice after Mueller found he couldn’t exonerate the president on that point. House Speaker Nancy Pelosi has said Barr is involved in a “staggering public effort” by the Trump administration to put a positive face on Mueller’s findings.

The Judiciary Committee’s top Republican, Rep. Doug Collins, R-Ga., accused Nadler of “doing everything he can to sabotage a perfectly good hearing in which the attorney general has volunteered to come and to talk about the report and its findings as he went along.”

“At this point, I think the Democrats don’t really know what they want to do,” Collins added. “The American people don’t want to see an impeachment, but the Democrats, to feed their base, have to make it look like impeachment.”

Fox News’ Jason Donner and The Associated Press contributed to this report.