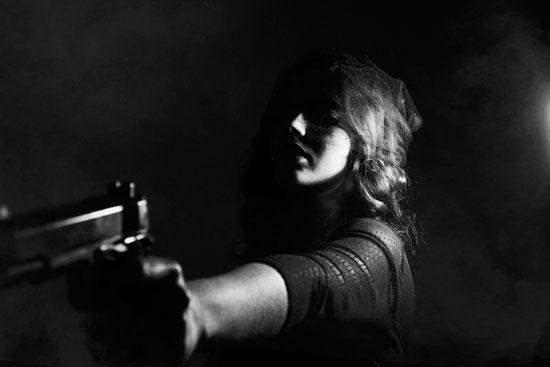 Just like Homer’s queen of Ithaca, Maria Campagna loyally pulled the strings in the “kingdom” of her incarcerated husband for years. But Salvatore Cappello was not sailing from one adventure to another. He was serving a sentence under a particularly restrictive prison regime reserved for mafiosi, murderers, and terrorists.

The role she played holding down the home front in Capello’s clan prompted Italian prosecutors to name the investigation “Penelope.” One clan member described her as “a woman with balls,” according to a wiretapped conversation.

Traditionally, Italy’s mafia wives were relegated to raising children or delivering messages from jailed bosses to clan members, a legacy that dates back to the mid-1800s.

But that stereotype seems to be rapidly fading.

To protect their ill-gotten assets from confiscation, men have been in recent decades transferring ownership to their wives or sisters.

Italian research center TransCrime recently revealed that while only 2.5 % of convicts sentenced in Italy for mafia-related crimes were women, they owned one third of all mafia assets.

Among the companies confiscated from Italy’s mafias, those in the restaurant and hospitality sectors have the highest proportion of female shareholders (52%), according to ongoing research by TransCrime that is still unpublished. It is followed by wholesale and retail trades (38%), transport (37,8%) and constructions (28,5%).

“In the construction and transport sectors, in particular, there are four times as many female shareholders in mafia-confiscated companies than in the legal economy,” said TransCrime researcher Michele Riccardi.

There are good reasons for this, Riccardi explained.

“They represent the ideal proxy because they usually have a less relevant criminal history, due-diligence monitoring has a hard time spotting them, and, if they are family, they allow the clan to keep the control of the company in-house,” Riccardi added.

“Mafias have been handing over financial activities to women in order to protect themselves from confiscations and to hide the true beneficiaries of the assets,” Alessandra Dino, professor of judicial sociology at the University of Palermo, told OCCRP.

From proxies to bosses

But the role of mafia women is not just passive anymore.

“There are numerous instances in Cosa Nostra and ‘Ndrangheta in which women are the leading characters and very much active in the managing of their family businesses” Dino said.

Campagna is not the first woman to hold a powerful position in a mafia clan in Italy and the pages of today’s anti-mafia prosecutors’ investigations are filled with names of female mafiosi acting as bosses, be they part of the ‘Ndrangheta, the Cosa Nostra, or the Camorra.

According to court files, Maria “Penelope” Campagna enjoyed the full trust of her husband. He respected her more that any of his male colleagues, so she was the one who managed the communication between him and the rest of the clan when he was in jail. She was the only one he trusted to personally deal with the South American traffickers from whom the clan purchased drugs.

Furthermore, Campagna was a specialist in “arranging the collecting of considerable amount of cocaine in any harbor it was shipped to,” investigators wrote in the arrest warrant.

All in all, Campagna was not a replacement. She was a boss.

The number of such women is still low, but increasing. In 1989, only one mafia-related indictment was filed against a woman. In 1995, there were 89.

The increase is due to a change in approach by prosecutors toward female criminals, Dino explained.

Getting tough on mafiosi women

Until the early ’90s, a crime was usually treated differently depending on whether it was committed by a woman or by a man.

“Take the illegal possession of firearms, for instance,” Dino said. “By reading court files we can see that it was often defined as ‘aiding and abetting’ if it was done by a mafia woman.”

A man would be charged with “mafia association,” a much more serious crime.

For a long time, prosecutors and the public believed women were pushed against their will into criminal activities by their male companions. It must also be noted that, according to the codes of honor adhered to by Italian mafias, a woman cannot go through a formal mafia affiliation ritual.

Because they were usually unable to formally establish the relationship between a woman and a mafia clan, prosecutors would charge women with crimes that were easier to prove in a courtroom.

“It is only since a 1999 third-degree sentence that the Italian judicial system recognised that a woman can in fact be charged with mafia crimes even in the absence of a formal affiliation,” Dino explained.

Italy’s penal code introduced the crime of “mafia association” in 1982. It is applied when a suspect makes use of a) group intimidation, b) subjugation of victims and c) a code of silence in order to gain control of business activities or to influence public voting. The code also allows for the confiscation of mafia assets. Since 1996, confiscated mafia assets have also been allowed to be to civil society organizations.

Some might see this trend as a type of female emancipation in the criminal world, but Ombretta Ingrascì, a researcher and author of several books about the role of women in Italian mafias, says it really isn’t.

“The detention of the male boss is the basic precondition for a woman to assume meaningful and operative power within the mafia clan,” she wrote in an email interview. That power is therefore “delegated and temporary,” and lasts only as long as the incarceration of the boss.

Take the case of Giusy Vitale. In the 1990s, her three brothers led the Sicilian clan of Partinico, a village 30 km west of Palermo. While behind bars, they decided to hand over control of the clan to her. She was competent, trustworthy, and charismatic. She ruled the Patrinicos with such an iron hand the media dubbed her the “boss in a skirt.”

During the brief period she led the mob before her arrest, Vitale did everything her male counterparts did, but as a woman, she was never allowed to participate in meetings of high-ranking mafia members.

Her brothers Giuseppe and Filippo, resourceful bosses of a Cosa Nostra clan in Palermo, were serving time for murder when they decided to appoint their sister to run the business in their absence.

Graviano pulled the strings, did the finances, and organized the money laundering from her hideout in Nice, on the French Riviera. She was smart, multi-lingual, a faithful reader of the most prominent financial newspaper in Italy, and good at using computers and spreadsheets.

“When Cosa Nostra entered the heroin trafficking business, the need for laundering profits made room for duties not immediately related to violence and opened up opportunities for responsibilities more suited to women than men,” Ingrascì wrote.

The organization needed accountants, not just nurturers, messengers, and proxies. Women could also be highly successful extortionists, since extortion relies more on psychology than physical violence.

Graviano was crucial to the well-being of the clan. Still, her brothers’ respect for her was limited. When they found out that she was carrying on a relationship with a Syrian doctor, they forced her to end it.

“What is this guy’s religion?” they asked her. “There is no room for divorce. Any relationship must lead to marriage,” they declared.

In Graviano’s case, modernity and tradition merged into the most common contradiction of today’s mafias.

“The female condition,” Ingrascì wrote, “evolves on one hand, and it backtracks on the other.”

The so-called “41-bis” regime (also known as “hard prison regime”) is an article of Italy’s Prison Administration Act introduced in 1986 that places special restrictive measures on certain inmates, such as a ban on phone use, fewer visits from family members, and fewer or no recreational activities. It can be applied to prisoners guilty of mafia crimes, homicide, extortion, kidnapping, drug trafficking, and terrorism. It serves two goals: to limit the inmate’s contact with the outside world, and to induce them to collaborate with authorities.

The special prison regime known as 41-bis has proven effective in breaking the chain of command of mafia clans across Italy.

Although spending time in prison is still considered an almost obligatory career step for a young mafioso-to-be, the minimal contact with the outside world allowed under the hard regime jeopardizes the authority of a boss.

This forced the criminal world to change tactics. Instead of being seasoned in jail, new recruits are now more likely to be protected and kept away from incarceration. If possible, they are sent abroad to study, learn foreign languages, and mature into trustworthy-seeming white-collar professionals: lawyers, accountants, notaries.

Along these lines, mafia women are asked to no longer flaunt their wealth publicly, cutting down on flamboyant jewelry, fur coats, and expensive cars. While their husbands, brothers, or nephews serve time, they represent the clans’ last bastion for keeping business going.

Authorities are well aware of this new approach, which was at the center of a nationwide training event for the Italian police last January.

Mafia connections are strong and usually life-long. But there is one thing even stronger than these bonds: motherhood.

It can still turn women into the weakest link.

As women have become more involved in the work of the mafia, the number of women who become informants is also increasing. Mentally and physically exhausted by a life filled with fear, blood, and murders, female mafiosi eventually face the question: Do I really want this life for my child?

To extricate their offspring from the criminal world, women have two options: to cooperate with authorities, who then help them disappear, or to disappear by themselves, which is far more difficult.

One of those who chose to turn to authorities is Maria, whose last name cannot be revealed because of security concerns.

Maria told OCCRP that she was 25 when she married a powerful ‘Ndrangheta boss in 1990. He was later killed in a feud between her family and her in-laws over a cocaine trafficking deal.

His body was set on fire and then fed to pigs to hide any traces of the murder, but the ‘Ndrangheta’s investigative skills are sharp. Her husband’s clan killed Maria’s brother and uncle in revenge.

Two years later, after moments of unbearable indecision, Maria decided to end this chain of violence before her daughter was dragged into it.

Maria knew well who killed her brother and uncle. She knew how the clans’ businesses worked and who the key players were.

“I knew too much,” she told OCCRP. “I had seen too many things. I decided to collaborate with prosecutors in order to save my daughter’s life and mine.”

After testifying in a trial that brought down tens of mafia members, and spending years in a witness protection program, Maria now lives a new life in a secret location under a new identity. But fear remains a constant companion.

Still, she said she was doing her best to lead a normal life for the sake of her child. The most important thing to her, she said, was that “my daughter is a happy young woman now, and I can smell the rain.”