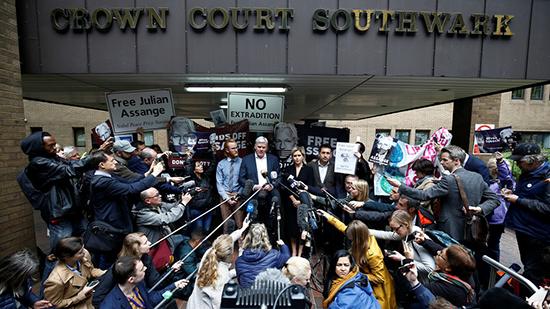 The lengthy sentence incurred by Julian Assange for skipping bail has caused “shock and outrage,” WikiLeaks Editor-in-Chief Kristinn Hrafnsson has said, adding that the real fight for him and journalism as a whole lies ahead.

The founder of WikiLeaks was slapped with a 50-week jail term –over his having skipped bail– by a UK court on Wednesday. The unusually long term for such an offence has caused “shock and outrage” and it “doesn’t increase our faith in the UK justice system,” Hrafnsson told reporters after the hearings.

The “real battle,” however is still ahead of them; that’s the extradition hearings for Julian Assange, he added.

As for now, Assange is accused by the US of “conspiracy” over working with Chelsea Manning, the whistleblower who obtained classified military documents that were subsequently published through WikiLeaks. Additional charges, however, are expected and the WikiLeaks founder might ultimately even face the death penalty in the US, Assange’s lawyer Jennifer Robinson warned.

While the prospect of extradition endangers Assange’s very life, it also threatens the freedom-of-speech principle and journalism as a whole, Hrafnsson stated, and the whole case should be perceived as quite a global battle.

Tomorrow is the first step in a long battle, so the fight will certainly continue. This is the fight for press freedom, primarily, as we’ve always stated.

“That is a real battle, it’s not just for Julian Assange – even though for him it’s a question of life and death – it is most certainly a question of perseverance [over] a major journalistic principle,” Hrafnsson stressed, adding that, if extradition succeeds, it would set a very dangerous precedent and after that no journalist would be safe.