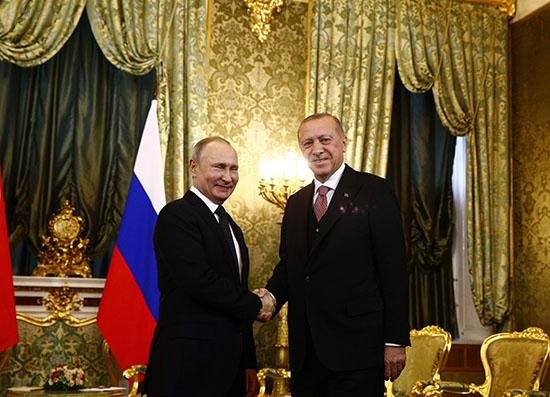 Turkish and Russian presidents have agreed in a phone conversation to continue close cooperation in Syria as part of Astana process.
According to a statement by the Turkish Presidency, President Recep Tayyip Erdoğan and his Russian counterpart Vladimir Putin discussed bilateral issues and recent developments in Libya and Syria on April 30.

Turkey, Russia, and Iran serve as guarantor states in the Astana peace process.

The Astana process has been successful in bringing a cease-fire in Syria and led to the creation of de-escalation zones.
Kremlin said that the two leaders exchanged views on the results of the eighth meeting of the High-Level Russian-Turkish Cooperation Council in Moscow on April 8.

“The leaders noted the importance of effective implementation of the agreements reached on promoting trade, economic, cultural and people-to-people ties, as well as on making continued progress on joint projects, including in the military-technical sphere,” read a statement by Kremlin.

“The two leaders stressed the importance of continued close coordination of Russia and Turkey’s efforts to stabilize the situation in Idlib and the need for effective measures to suppress terrorist groups,” the statement said adding that both leaders confirmed “that launching the Constitutional Committee as soon as possible is a priority task within the context of the 12th International Meeting on Syria held in Nur-Sultan on April 25–26.”

According to Kremlin, both sides expressed shared concern over the escalation of tensions in Libya. “Mr. Putin and Mr. Erdoğan spoke in favor of achieving a ceasefire and resuming a political settlement process under the U.N. aegis as soon as possible,” the statement read.

In early April, Khalifa Haftar, who commands forces loyal to Libya’s eastern government, launched a campaign to capture Libya’s capital Tripoli from the U.N.-recognized Government of National Accord (GNA).

Libya has remained beset by turmoil since long-serving leader Muammar Gaddafi was ousted and killed in a bloody NATO-backed uprising in 2011.

Since then, the oil-rich country has seen the emergence of two rival seats of power: one in eastern Libya, to which Haftar is affiliated, and another in Tripoli, which enjoys U.N. recognition.