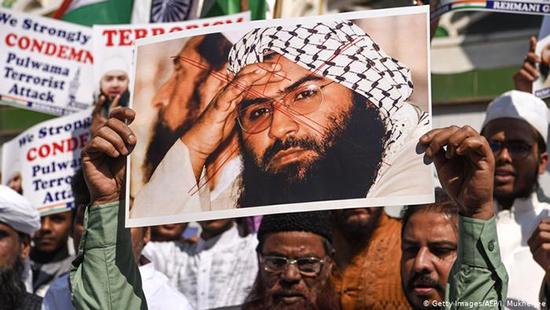 India has sought for years to have Masood Azhar placed on a UN list of global terrorists. His group claimed a deadly bombing in Indian-controlled Kashmir that nearly brought the country to war with Pakistan.

The United Nations has blacklisted Masood Azhar, the head of a Pakistan-based militant group Jaish-e-Mohammed (JeM). It claimed responsibility for a February suicide attack in Indian-administered Kashmir that killed 40 soldiers.

The UN sanctions committee on the “Islamic State” and Al-Qaida announced the ban on Wednesday over his ties to Al-Qaida.

The sanctions against Masood Azhar, the leader of JeM, come with a travel ban, asset freeze and arms embargo. JeM has been on the UN terror list since 2001.

India said Azhar and his group have been able to move freely inside Pakistan and demanded that its neighbor act to stop militant groups operating from its soil.

China allowed its objection to the move to lapse over a Wednesday deadline. It had previously repeated its opposition.

India responded to the February bombing on its paramilitary police with airstrikes in northeast Pakistan against what it said were militant camps. Pakistan later shot down two Indian jets and captured a pilot.

The tit-for-tat escalation between the nuclear-armed neighbors; who have fought three wars since gaining independence in 1947, was defused through international mediation.

Azhar founded JeM in 2000 after being released from an Indian prison in exchange for 155 hostages from a hijacked Indian Airlines plane.

The militant leader is one of India’s most wanted men, and his group has carried out numerous attacks in India, including the 2001 attack on Parliament.

India has for years sought to have Azhar placed on the UN blacklist.