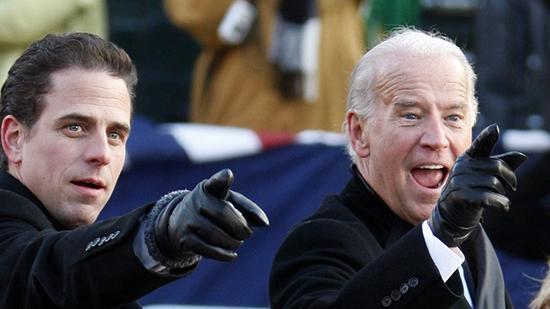 As Joe Biden leads the pack of candidates for Democratic presidential nomination in 2020, the New York Times has decided to describe accusations about his son’s shady dealings in Ukraine as a politically motivated Trump hit job.

“For Biden, a Ukraine Matter That Won’t Go Away,” proclaimed the cover page of the New York printed edition on Thursday. Online, however, the headline was much more pointed: “Biden Faces Conflict of Interest Questions That Are Being Promoted by Trump and Allies.”

NEW: The BIDENS are entangled in a Ukrainian corruption scandal:@JoeBiden pushed Ukraine to fire a prosecutor seen as corrupt.
BUT the prosecutor had opened a case into a company that was paying HUNTER BIDEN.
The Bidens say they never discussed it. https://t.co/tblUPYPJMG

Hunter Biden, the middle son of the former vice-president, had served on the board of the Ukrainian oil and gas company Burisma Holdings since 2014, getting paid as much as $50,000 a month. The Times acknowledges Biden “lacked any experience in Ukraine” at the time, and had just been drummed out of the US Navy Reserve after testing positive for cocaine.

Furthermore, the paper concedes that Biden’s hiring was “part of a broad effort by Burisma to bring in well-connected Democrats during a period when the company was facing investigations” from both Ukrainian authorities and the Obama administration.

People have no idea just how big it really is. https://t.co/IsjCdOSSb0

Biden was paid through Rosemont Seneca Bohai LLC, part of a network of companies he co-founded in 2009 with Christopher Heinz (stepson of then-senator, later Secretary of State John Kerry) and Devon Archer, described as a “Kerry family friend.”

Or does that term only apply to officials and oligarchs from countries the US has targeted for regime change? https://t.co/vrkZG33dV9

Rosemont brought in American consultants – including Blue Star Strategies, described as a “consulting firm run by Clinton administration veterans that had done substantial work in Ukraine” – in order to fend off Ukrainian government investigations into Burisma and its owner, reportedly begun prior to 2014, then dropped, then restarted again recently, and now in some kind of legal limbo pending the inauguration of the new president, Volodymyr Zelensky, elected last month.

On Wednesday, Biden issued a statement that his term on Burisma’s board had expired and he resigned due to a political climate in which he was “being attacked by Rudy Giuliani and his minions for transparent political purposes.”

Giuliani is the personal lawyer for President Donald Trump. That, according to the Times, is the real story here: not how family members of prominent US officials in the last administration cashed in on the 2014 US-backed coup in Kiev; or even the possibility that Joe Biden’s famous March 2016 ultimatum to the totally “sovereign and independent” Ukrainian government may have helped the company his son was working for. Indeed, the story contains multiple denials from both Bidens and others who worked with, that that they’d so much as discussed Burisma.

What really matters to the Times here – hence the headline – is what the paper describes as “Trump team’s efforts to draw attention to the Bidens’ work in Ukraine, which is already yielding coverage in conservative media.”

Typical fake “investigative journalism” from the NY Times, “revealing” trivial matters of little importance to divert from the shocking truth. The key figure in connection with the Bidens and #Burisma is #Kolomoisky, #Zelensky is merely his puppet. https://t.co/sdSlXAXOAVhttps://t.co/G4Z7r848ZC