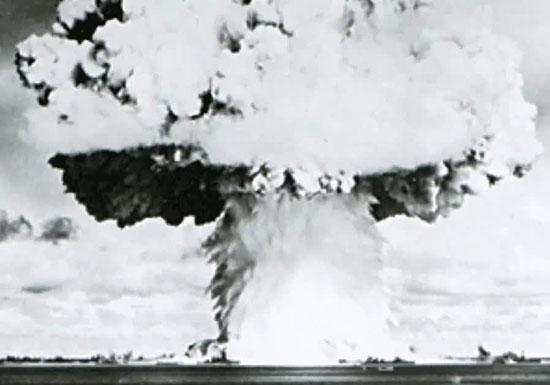 The is not the first time there has been a claim that Israelis had nuclear weapons during the Six Day War and were prepared to use them.

Israel had a plutonium core ready for nuclear weapon production hidden away just under ten miles from Ashdod during the 1967 Six Day War, according to a testimony by Elie Geisler, who was charged with guarding the radioactive “package” at the time.

According to the The Nonproliferation Review, where Geisler’s experiences were recorded, Geisler was a radiation-safety officer working in an “unassuming one-floor building,” in Gedera, which was disguised as “administrative and maintenance offices.”

Geisler guarded the radioactive “package,” which he understood to be a pit, which is the core of a nuclear weapon.

“I’d silently pray and wish that we should never employ this horrific invention of humanity. I knew perfectly well that the use of the device would be the ‘last resort’ of the political leadership of the country, whose policy was, and remains to this day, not to be the first to introduce nuclear weapons to the Middle East,” Avner Cohen wrote in the journal paraphrasing Geisler, “neither confirming nor denying the Israeli nuclear-weapon capability.”

The is not the first time there has been a claim that Israelis had nuclear weapons during the Six Day War and were prepared to use them.

According to a report by the New York Times in 1967, Israeli officials were scrambling to assemble an atomic device and detonate it in the Sinai Peninsula to warn the Egyptians and other Arab nations. Because Israel won the war, the device was never deemed necessary.

“Look, it was so natural,” said Itzhak Yaakov, an organizer of the plan, rightfully called “doomsday operation.”. “You’ve got an enemy, and he says he’s going to throw you to the sea. You believe him.”

“How can you stop him?” he asked. “You scare him. If you’ve got something you can scare him with, you scare him.”

Israeli researchers have disputed this claim. Prof. Avner Cohen told Ynet that this was impossible because Israel did not have nuclear capabilities at the time.

“He describes events as he saw them from his own personal point of you. Does it accurately fit with the overall, objective and the historical truth? It’s hard to tell. I had a lot of questions about this,” said Cohen to Ynet. Cohen is the author of Israel and the Bomb, a history of Israel’s nuclear history.

Michael Oren, a politician and historian of the Six Day War was also skeptical of Yaakov’s account.

“Among serious researchers, that is something unacceptable,” Oren said, according to Times of Israel.

“I also interviewed Yitzhak Yaakov, and I was not convinced that the story holds water,” he continued.

While the Israeli government denies that it currently has nuclear weapons, it is widely believed that it does. The only use of nuclear weapons in an armed conflict were in Hiroshima and Nagasaki in August 1945, killing thousands of people.