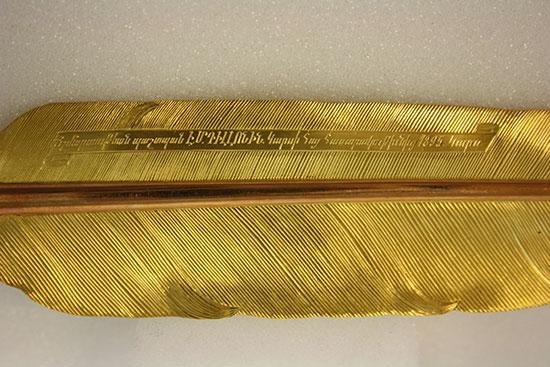 The quill pen presented by the Armenian Society/Community of Kars to the Irish journalist Emile J. Dillon in 1895, in recognition of him having reported the Turkish massacres of the Armenians in 1894 and 1895, donated to the National Museum of Ireland in Dublin by his widow Mrs. Kathlyn M. Dillon in 1950. The museum’s collection entries read as follows:

HH:1950.2
Pen/Model of a Quill
Gold model of a quill pen, in presentation case. Inscription on scroll: “E.M. Dillon, Esqre …a ‘Defender of Veracity’ from the Armenian Society of Kars, 1895” on one side and the same in a near-eastern language on scroll on the other. With goldsmith’s mark, probably Russian. In presentation case covered maroon leather, and tooled in gold, with the same inscription, in both languages, on the lid. Dr. Emile Joseph Dillon, born in Dublin, was war correspondent of the DAILY TELEGRAPH. The pen was presented to him by the Armenian Society of Kars in recognition of him having reported the Turkish massacres of the Armenians in 1894 and 1895. The donor is Dr. Dillon’s widow. Length: 12.5 inches.
https://www.museum.ie/Historical-Collections (search for Armenia).

HH:1953.5
Photograph of Dr. E.J. (Emile Joseph) Dillon. In disguise, used going through Turkey to prepare his report on the massacre of the Armenians in 1895. Cabinet card.