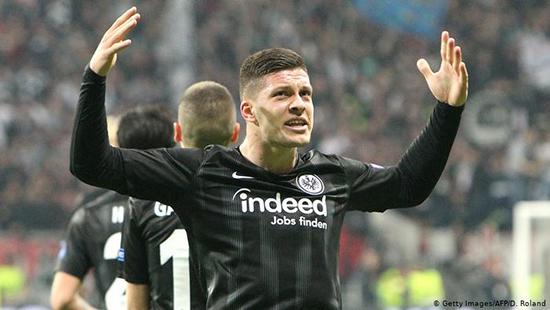 On another historic European night at the Waldstadion, Eintracht Frankfurt battled their way to a well-earned draw against top quality opposition. Once again, the Eagles’ fanatic supporters more than played their part.

The Waldstadion in Frankfurt briefly fell silent before breaking into a slow, almost mournful melody. “Eintracht from the River Main – only you shall triumph today!” they sang, the 46,000 home supporters who hadn’t moved since the full-time whistle.

“Eintracht from the River Main – because we all adore you!” the anthem went on, serenading the black-shirted Frankfurt players who stood motionless and exhausted in the penalty area in front of the Nordwestkurve.

After criss-crossing Europe from Rome to Lisbon, from Milan to Ukraine, to reach a first major European semi-final in 39 years, the visit of

Chelsea, the penultimate and biggest hurdle on the road to Baku, had pushed the Eagles to their very limit.

For periods in the second half, the Eintracht goal resembled the Alamo. A David Luiz free-kick crashed off the bar before Kevin Trapp saved from Ruben Loftus Cheek and then a Luiz header from an Eden Hazard free-kick. Eintracht were well aware of the Premier League side’s superior individual quality and it was beginning to show.

Fortunately for the hosts, as so often on this arduous journey across the continent, they had an extra man. “We need to ramp it up another level on the terraces!” demanded the flyer distributed by the ultras pre-match. “Today it’s 12 vs. 11 – Frankfurt madness against all of Europe!”

Eintracht Frankfurt’s fanatical supporters have been widely and rightly praised for the way in which they have taken this competition to heart, and they played their part again here. The decibel levels had been rising since before kick-off when the ultras unveiled their latest pre-match masterpiece, this time a super-sized tapestry of flags and banners covering both tiers of the north-west stand, documenting the history of the notorious “Ultras Frankfurt.”

Like the previous six displays at Europa League home games this season, it was an expression of an authentic, living fan culture, an embodiment of intense pride in club and city. Of course, it was also self-glorification on the ultras’ part – but why not? The raucous atmospheres they have generated throughout this European campaign have helped lift this team to historic heights, Eagles circulating ever higher on vectors of passion and pride.

Because this isn’t a team of superstars – not before this campaign, anyway. This is a squad made up of players for whom, for various reasons, it hadn’t worked out elsewhere.

Sebastian Rode’s Borussia Dortmund career never took off, partly down to injury, but he has become an important energetic and physical cog in Frankfurt’s midfield, and his robust challenge on Pedro five minutes before half-time was greeted with a guttural roar from the massed ranks behind the goal.

An even louder roar went up when the ball fell to César Azpilicueta and the Spaniard was immediately checked by Filip Kostic, a player who looked to have reached a dead end after difficult spells in Stuttgart and Hamburg.

In Frankfurt, he’s been an indispensable source of assists and goals from the left-wing, including tonight, when he provided the pin-point cross which was glanced home by Luka Jovic – another player whose original dream move to Benfica hadn’t worked out as hoped. Yet here he was scoring his 26th goal of the season and putting Frankfurt ahead in a European semi-final.

The Waldstadion exploded. “Eintracht Frankfurt, olé!” they roared from all four stands, reaching volumes which would have drowned out the noise of the jumbo-jets passing overhead on their way to and from the nearby airport.

The 1,600 travelling English supporters in the corner had no chance – but they did have their moment. There had already been warning signs for Eintracht, with Pedro and Loftus-Cheek putting shots wide. One minute before the break however, Pedro made no mistake, finding space with a brilliant touch inside a crowded penalty area and firing home.

Chelsea had their away goal, and they would have had a second after half-time were it not for Trapp’s heroics, but Frankfurt stood firm, fighting through the fatigue and the debilitating cramps.

“That was a success against a top team which deserves the upmost respect,” praised coach Adi Hütter post-match, before looking ahead with confidence to the second leg: “After drawing 0-0 at home to Inter, we’ve already shown that we can go away and win. What have we got to lose?”

And that’s precisely how the fans will see it. “Auswärtssieg!” they screamed as the players finally left the pitch, a demand for an “away victory” next week at Stamford Bridge, where Frankfurt have only been allocated 2,235 tickets.

The melodic anthem at full-time was no emotional lament in the face of defeat. Eintracht Frankfurt – the club, the players, the fans, the whole city – are still very much in the Europa League.