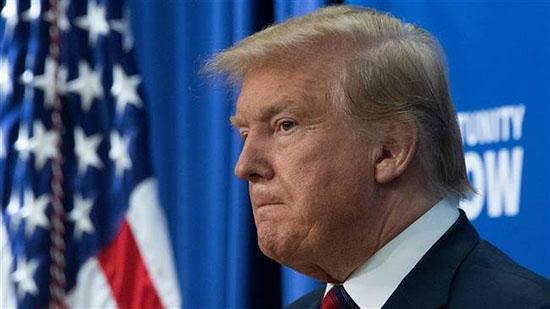 David Hearst- MEE
The fight to stop this ban is not about whether political Islam is a good or bad thing. It’s about protecting democracy at home and abroad.

US President Donald Trump is not influenced by dictators.

He is not really embarrassed by what they do and he does not have their back for want of a reliable alternative. Trump supports dictators because he agrees with them. His polices and theirs are, to a remarkable degree, aligned.

After the release of the Mueller report, Trump, who no longer thinks his presidency is doomed and who is eying a second term with confidence, is showing his true colours.

True to his word

No one can accuse Trump of tweet-driven policy making when it comes to his forthcoming designation of the Muslim Brotherhood as a terrorist group, which was signalled on Monday.

It was stated in plain terms back in November 2016 by his then foreign policy adviser Walid Phares, a former ideologue of the Lebanese Christian militia that committed war crimes during the Lebanese civil war. Along with the recognition of Jerusalem as Israel’s capital and the tearing up of the nuclear agreement with Iran.

If you are a Saudi prince, who employs people to cut the fingers off journalists before strangling them, you would be banging the table in support of Trump’s Brotherhood ban

Well before that, Trump attacked Barack Obama for “funding the Arab Spring” .

“@BarackObama’s budget funds the ‘Arab Spring’ with $800B and the Muslim Brotherhood in Egypt $1.3B in military aid. He loves radical Islam,” Trump tweeted in February 2012.

“Obama now wants to give another $450m to the Muslim Brotherhood. Money we don’t have going to people that hate us. Moronic.”

It’s a mistake to think that Trump was engaged in some kind of spectator sport before he rose to power. He is a man who is true to his word. That’s the problem, because there is no one left to tame him.

The MB ban was part and parcel of the baggage Mike Pompeo, the secretary of state, brought to office. As a member of Congress he co-sponsored a bill to ban the Brotherhood.

“There are organisations and networks here in the United States tied to radical Islam in deep and fundamental ways,” Pompeo told host Frank Gaffney. “They’re not just in places like Libya and Syria and Iraq, but in places like Coldwater, Kansas, and small towns all throughout America.”

It was the purpose of twin bills re-introduced by Senators Ted Cruz and Mario Diaz-Balart, in the same month of Trump’s inauguration, to require the State Department to inform Congress “whether the Muslim Brotherhood meets the criteria for designation as a foreign terrorist organisation”.

So this is not some big surprise. A ban on the Brotherhood has been heavily signalled.

It is possible that this will be the most dangerous and consequential decision Trump will have made to date, in what has already proved to be the most destructive presidency in modern US history.

In the very week when the self-declared caliph of the Islamic State, Abu Bakr al-Baghdadi, re-appeared on screen to taunt Trump that he and an estimated 15,000 fighters are still in business after the loss of their last piece of real-estate, Baghouz in Syria, nothing could be better designed to give the bloated al-Baghdadi a bigger shot in the arm than a ban on his greatest and most effective enemy, the Muslim Brotherhood.

Counter-terrorist professionals with no love or deep knowledge of political Islam, such as the CIA or MI6, have made the same point repeatedly.

Nothing could be better designed to give the bloated Baghdadi a bigger shot in the arm than a ban on his greatest enemy, the Muslim Brotherhood

Eleven days after Trump’s inauguration in January 2017, the CIA published internally a document decimating Trump’s reasons for designating  the Brotherhood a terrorist organisation.

For the CIA, it was not merely a question of numbers, of the MB enjoying “widespread support” in the region, particularly in the nations listed as US allies.

As Politico reported, the CIA re-affirmed that the Brotherhood “rejected violence as a matter of official policy and opposed al-Qa’eda and ISIS”.

Acknowledging that a minority of MB members engaged in violence in response to regime repression, perceived foreign occupation or civil conflicts, the CIA concluded: “A US designation would probably weaken MB leaders’ arguments against violence and provide ISIS and al-Qa’ida additional grist for propaganda to win followers and support, particularly for attacks against US interests.”

The message was clear: in the CIA’s view a ban on the Brotherhood would fuel extremism, not see it off. The same arguments surfaced in the MI6’s response to David Cameron’s Emirati-fuelled probe on the Brotherhood in the UK led by Sir John Jenkins.

Both the CIA and MI6 leaked their objections to the media to make sure their voice was heard.

Trump is not listening. But Rex Tillerson, his former secretary of state, was. Tillerson 1.0 mouthed the same destructive platitudes as Trump still does, in his confirmation hearing: “The demise of ISIS will also allow us to increase our attention on other agents of radical Islam like Al Qaeda, the Muslim Brotherhood and certain elements within Iran,” the secretary of state designate said.

But after only a few months in office, Tillerson 2.0 backtracked. He told a Senate hearing that designating the Brotherhood a terrorist organisation could complicate Washington’s relations with the Middle East.

Telling the Senate Foreign Relations Committee, the Brotherhood had five million members – a claim few had heard before, and five times the usual estimate – Tillerson said the Brotherhood had become “somewhat segregated” within its own ranks, with subgroups, which are already blacklisted by the US, continuing to commit themselves to violence.

“But at the top of the quality chain, if I can call it that, there are elements of the Muslim Brotherhood that have now become parts of governments. Those elements have become so by renouncing violence and terrorism.”

Tillerson has since been flushed down the wastepipe of this administration along with many others who tried to temper the white nationalist urge of the president.

The brakes are off for Trump after the Mueller inquiry. And one reason they are so is because a Muslim Brotherhood ban enjoys a genuine coalition of regional support.

Put to one side for a moment an unpleasant hand-me-down from the Christian militias of the Lebanese Civil War. Or Steve Bannon, who is now trying to start an Alt-Right academy for the far right in an Italian monastery.

If you are a Saudi prince, who employs people to cut the fingers off journalists before strangling them, you would be banging the table in support of Trump’s Brotherhood ban.

If you are an Emirati crown prince who lists 83 Muslim organisations worldwide as terrorist organisations, including the Council on American-Islamic Relations (CAIR) or the Muslim Association of Britain (MAB), then Trump’s impending ban is pay day, the reward for all the investment of time and money in the US president.

If you are an Israeli prime minister intent on burying for good the two-state solution and shielding the apartheid one state you are in the process of constructing, then you, too, will quietly punch the air as Trump announces his ban.

The most effective groups internationally against Israel are Islamist.

If you are a general who has shed the blood of thousands of Egyptians in a dictatorship far more bloody than that of Hosni Mubarak, you, too, will get a lifeline from Trump’s announcement.

Each Arab potentate is as frightened as the Israeli one is cynical. All maximise the use of force for political reasons, which is one of the definitions of terrorism.

These are Trump’s natural bedfellows. And they are deeply destructive leaders who will push the region to a mayhem far worse than anything we have seen so far.

Trump is sending two messages out in banning the Brotherhood. To his white nationalist Islamophobic base he is saying: “Go ahead. Blur the distinctions. Radical Islam aka the Brotherhood aka any Muslim who puts his or her head above the parapet hates us. You make America great by making American Muslims small.”

This is not pastiche. “Fear of Muslims is RATIONAL,” Trump’s former national security adviser Michael Flynn once tweeted on an account since deleted.

To Arabs, in general, Trump’s message is this: “Democracy does not work. Non-violence won’t get you anywhere. Peaceful demonstrations are for the fairies. You have two options. Knuckle down under dictators who will impoverish you and weaken your state, or join IS. The choice is yours –  torture at the hands of your own security forces, or immolation at the hands of mine.”

It’s about protecting democracy at home and abroad. Austria has just banned the Muslim Brotherhood symbol. The French President Emmanuel Macron said on 25 April that “political Islam wants to secede from our republic”.

David Hearst is the Editor in Chief of the Middle East Eye. He left The Guardian as its chief foreign leader writer. In a career spanning 29 years, he covered the Brighton bomb, the miner’s strike, the loyalist backlash in the wake of the Anglo-Irish Agreement in Northern Ireland, the first conflicts in the breakup of the former Yugoslavia in Slovenia and Croatia, the end of the Soviet Union , Chechnya, and the bushfire wars that accompanied it. He charted Boris Yeltsin’s moral and physical decline and the conditions which created the rise of Putin. After Ireland, he was appointed Europe correspondent for Guardian Europe, then joined the Moscow bureau in 1992, before becoming bureau chief in 1994. He left Russia in 1997 to join the foreign desk, became European editor and then Associate Foreign Editor. He joined The Guardian from The Scotsman, where he worked as education correspondent.