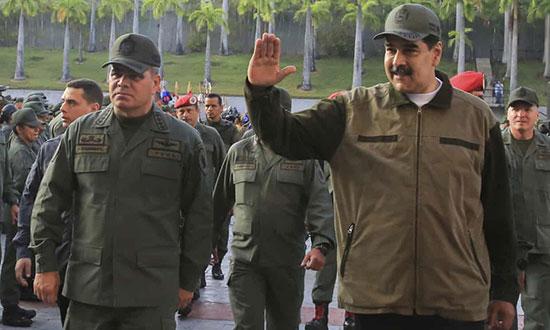 After a botched attempt to overthrow him, Maduro holds ‘march to reaffirm the absolute loyalty of the armed forces’

Nicolás Maduro has thanked Venezuela’s military for resisting what he branded a treacherous “imperial” plot to topple him this week by sparking a conflict that would justify foreign military intervention.

“Loyalty is a value that you either have or you don’t … I know you will not fail the homeland,” Maduro told troops during an early-morning parade in Caracas that was broadcast on state television.

“How many deaths would there be if a civil war started here because of the senselessness of the coup-mongers and traitors? How much physical destruction would there be and how many years of war would we face?” Maduro asked. “Because we will never surrender.”

The parade – which state TV called a “march to reaffirm the absolute loyalty of the armed forces” – was designed to buttress Maduro’s position after Tuesday’s botched pre-dawn attempt to overthrow him.

At shortly before 5am that day, opposition leader Juan Guaidó appeared outside a key military airbase in Caracas – just six miles from the presidential palace – and urged the country’s armed forces to turn on Maduro.

US officials claimed that a detailed draft plan had been agreed upon between those officials and the opposition, by which Maduro would be able to leave, to be replaced by Guaidó as interim president. The supreme court and military command would remain in their positions, and elections would be held within a year.

Padrino López appeared alongside Maduro at Thursday morning’s parade and hinted at those claims, berating what he called the opposition’s attempts to buy Venezuela’s military “as if we were mercenaries”.

In a high-profile show of support for Maduro, Padrino López said Venezuela’s “anti-democratic, fascist, extremist and far-right” opposition had nothing to offer the country or the armed forces.

“Always loyal, never traitors!” he shouted in conclusion, using what has become the maxim of Maduro’s three-month battle to retain power.

At least four people died, more than 230 were injured, and 205 were detained during demonstrations and clashes between protesters and security forces this week, according to Venezuelan human rights groups.

Thursday’s parade came hours after Guaidó’s most powerful international backer, Donald Trump, said Washington would do everything short of “the ultimate” to force out Maduro, who he called a “tough player”.

“It’s an incredible mess … The place is so bad and so dangerous … so something is going to have to be done,” Trump told Fox News in a rambling 10-minute discussion of Venezuela’s crisis.

Asked what the United States’ options were, Trump replied: “Well, some of them I don’t even like to mention to you because they are pretty tough.

“A lot of things will be going on over the next week and sooner than that. We will see what happens.”

Elliott Abrams, the US envoy for Venezuela, claimed the US did not take part in the negotiations between the opposition and members of the regime, but insisted an agreement laying out terms of a political transition had been ready to sign.

“There is a document,” Abrams told the Venezuelan channel, VPITV. “The US was not involved in the negotiations, but they tell me it is a long document – there are 15 points I think – it mentions guarantees for the military, a dignified exit for Maduro, Guaidó as interim president, the supreme court and the high command stay in position, free elections within 12 months.”

Abrams called it “a good plan for the recovery of a stable democracy in Venezuela”.

The US national security adviser, John Bolton, said that under the plan: “The [Venezuelan] supreme court would declare Maduro’s constituent assembly illegitimate. That would clarify for everybody, if anybody needed clarification, the legitimacy of the national assembly led by Juan Guaidó.”

Bolton told Hugh Hewitt, a radio talkshow host, on Wednesday, that the court decision “would have allowed the military to cover themselves in a way – defence minister Padrino and others – to take action. Now for reasons that are still not clear, that didn’t go forward yesterday.”

Maduro reportedly became aware of the plans on Monday, forcing Guaidó to bring forward his plan by a day and, perhaps, contributing to its failure.

There is also speculation that the opposition may have been tricked by Padrino and others into thinking they had a deal, in order to portray them as coup-plotters.

Bolton said a meeting of Trump’s top national security and foreign policy aides on Venezuela was held at the White House on Wednesday. The acting defence secretary, Patrick Shanahan, cancelled a trip to Europe because of the crisis. According to the Washington Post, Bolton and his team have clashed with US military leaders over their reported reluctance to put forward military options for Venezuela.

In his remarks on Wednesday, Bolton appeared to goad military leaders into taking an aggressive stance.

“Adm Faller [head of Southern Command] had a great line a couple of days ago referring to the Southern Command which he’s in charge of. He said we’re on the balls of our feet ready to go. And that’s the kind of attitude we need,” Bolton said. The national security adviser also seemed to make a pitch to his own boss for tougher action.

“We’re at a time for choosing here,” Bolton said. “And I just don’t believe President Trump is prepared to see foreign governments effectively take over the control of Venezuela, and which possesses the largest reserves of petroleum in the world.”