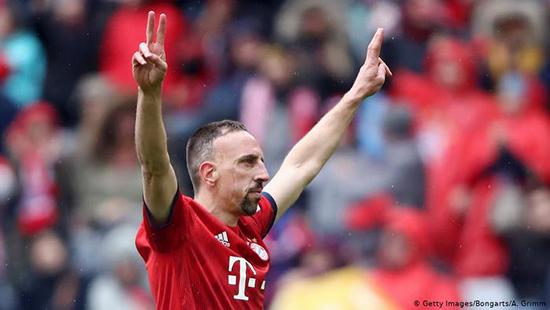 The 36-year-old forward has announced his decision after 12 years with the German record titleholders. The former French international has made more than 400 appearances for the Bavarians giants.

Franck Ribery will leave Bayern Munich at the end of the season after 12 years with the Bundesliga side, the French winger announced on the club’s website.

“When I came to Bayern, it was a dream come true. It won’t be easy to say goodbye, but we must never forget what we’ve achieved together,” he said.

Ribery won 21 major honors, including eight Bundesliga titles and the Champions League, with Bayern after he joined the club from French side Olympique de Marseille in 2007.

The 36-year-old admitted he was still unclear on his plans for next season but indicated he wanted to continue playing.

“I don’t have a proper plan yet for next season. I don’t know what I will do and where I will be going to play football,” he said.

The former French international will be leaving the club alongside former Dutch international Arjen Robben, who announced in December that he would end his career with Bayern in the summer.

“FC Bayern owes a lot to both of them and we will give them a wonderful and emotional farewell. They’ve helped shape FC Bayern’s most successful decade with fantastic football,” Bayern chairman Karl-Heinz Rummenigge said.

Both players are set to be honored at a testimonial match in 2020.