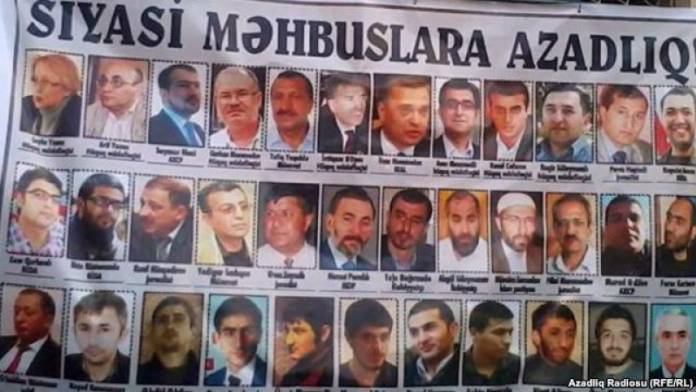 Baku / 06.05.19 / Turan: “After pardon on March 16, 2019, 87 political prisoners remain in custody. However, the repression engine continues to work. ” This is stated in the statement of the Union for the Freedom of Political Prisoners.

According to Prosecutor General Zakir Garalov, 77 people were prosecuted for taking part in the Gence events in July – August 2018.

Monitoring of the investigation and trials in this case showed that the trials took place in Baku, although they were led by the Gence Court of Grave Crimes, and the judges came to Baku. All the defendants were divided into several groups.

On February 22, 2019, the court chaired by Natig Aliyev sentenced 11 citizens:

* Maarif Hajiyev to 9 years in prison;

* Ruslan Hasanov to 8 years in prison;

* Tural Bayramov to 8 years in prison;

* Nizami Akbarov to 8 years in prison;

* Kamala Maharramov to 8 years and 6 months in prison;

* Araz Hasanov to 7 years and 6 months in prison;

* Togrul Verdiyev to 8 years in prison;

* Orkhan Yagnaliyev to 8 years and 6 months in prison;

* Seymur Aliyev to 8 years in prison;

The analysis of this process showed that the verdict is unfounded, unfair, and made under a political order. The court ignored the absence of any evidence of the defendants’ guilt, did not investigate allegations of torture, violating Articles 28 and 46 of the Constitution of the Republic of Azerbaijan, Articles 13 and 21.2. Criminal Procedure Code of the Republic of Azerbaijan, as well as international law: Articles 6 (2), 5 (1), 3 of the European Convention for the Protection of Human Rights, as well as the Convention against Torture.

For this reason, the Union for the Freedom of Political Prisoners entered the names of all 11 convicts on the list of political prisoners in Azerbaijan, the statement said.

The document was signed by: Leyla Yunus, Director of the Institute for Peace and Democracy;

Elshan Hasanov, Head of the Center for Monitoring Political Prisoners;

Hilal Mammadov, editor-in-chief of the newspaper Tolyshi Sado and

Eldaniz Guliyev, chairman of the Union of Intellectuals. -02D-