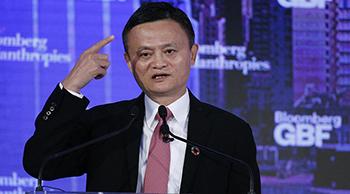 A 59 percent year-on-year value increase to $141 billion helped e-commerce giant Alibaba claim first spot in the BrandZ Top 100 Most Valuable Chinese Brands, according to a report released on Monday.

It’s the first time the firm has been named the nation’s most valuable brand in the annual ranking. BrandZ is the world’s largest and most definitive brand building platform, created by WPP group and Kantar.

The report showed that Alibaba’s brand value has grown 136 percent over the past five years in BrandZ’s Top 100, “outperforming the Top 100 overall which increased 92 percent over the same period.”

“Since first appearing in the ranking in 2015 following its IPO, Alibaba’s rise to the number one spot in 2019 reflects the growth of a brand which has contributed to transformational changes in the Chinese market,” it said.

Alibaba was followed by investment conglomerate Tencent, which increased to $138 billion in value. Huawei, Baidu and JD were also among the 10 most valuable Chinese brands in the rating.

He added that “the threshold to enter the BrandZ China Top 100 has more than doubled from $311 million in 2018 to $681 million in 2019.” That has demonstrated the continued pace of growth for Chinese brands increasingly recognized as leading the way in innovation, according to Roth.

“Against a backdrop of heightened competition and disruption, building stronger brands is what it takes to stay in the game,” he said.

The report noted vast potential for further brand growth overseas “as China moves beyond the industrial focus of its Belt and Road initiative” towards establishing leadership in areas including artificial intelligence (AI), robotics, Internet of Things (IoT) and green energy.