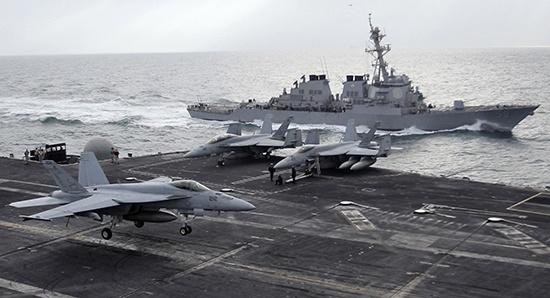 US Acting Secretary of Defence Patrick Shanahan earlier confirmed US National Security Adviser John Bolton’s statement regarding US deployment of the USS Abraham Lincoln and a bomber task force to the US Central Command region, intended to send a message to Tehran.

Iran’s Supreme National Security Council (SNSC)’s spokesman Keivan Khosravi, reacting to the US announcement of carrier strike group deployment, noted that the USS Abraham Lincoln Carrier had entered the Mediterranean 21 days ago, according to Press TV.

“Bolton’s statement is a clumsy use of an out-of-date event for psychological warfare,” Khosravi said as cited by Tasnim.

The spokesperson argued that Bolton “lacks military and security understanding and his remarks are mostly meant to draw attention to himself.”

Khosravi also noted that it was unlikely that US commanders and military forces would be willing to test the proven capabilities of the armed forces of Iran, a Press TV report says.

The deployment, which was announced under the pretext of countering the “Iranian threat” cited by Patrick Shanahan, came amid growing tensions between Washington and Tehran and the former’s efforts to intensify pressure against Iran following the 2018 US withdrawal from the Joint Comprehensive Plan of Actions (JCPOA), also known as Iran nuclear deal.

Tehran in its turn responded by placing first the US Central Command and then the entire US military on its own list of terrorist groups.

Last month Washington announced that it would not reissue waivers for Iranian oil importers after their expiry on 2 May. Iran fired back by threatening to close the Strait of Hormuz —  a key strategic waterway through which about 20 percent of the world’s oil and about a third of all petroleum are shipped by sea.

Iran, reacting to US policy, will reportedly announce plans on reducing some its obligations under the JCPOA on Wednesday, Mehr News Agency reports.