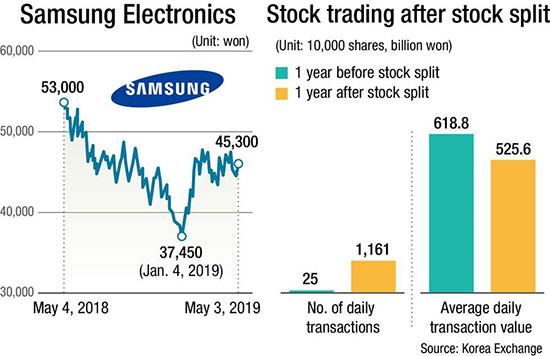 By Kim Bo-eun – The Korea Times

Individual investors are fretting over the unexpected fall of prices and trading value of Samsung Electronics shares after the company split its stocks in January 2018.

The tech giant split its stocks to make shares more affordable for individual investors and boost their trading but the value has fallen due to a surge in the number of shares coupled with worsening earnings.

After its 50:1 stock split in January, the firm resumed trading on May 4 the same year. As a result, Samsung Electronics held about 6 billion shares, making it number one on the main bourse in terms of the total number of listed shares.

The stock split slashed down the price per share from 2.6 million won to 53,000 won but the price has never surpassed 53,000 won even once.

As expected, the number of shareholders surged. The number grew from 158,000 from the end of 2017 to 788,000 in 2018. This was evident at the conglomerate’s general shareholder meeting held in March — which was crowded with attendees.

The percentage of Samsung Electronics stocks held by minority shareholders stood at 5.76 percent as of the end of last year, which is a 2.89 percentage point growth from 2.87 percent in 2017.

The spike in the number of shareholders resulted in an increase in the average number of daily transactions, which grew from 250,000 to 11.62 million over the past year.

This is due to the downturn in the semiconductor industry. Reflecting the slump in memory chips and displays, the IT conglomerate’s net profit for the first quarter of the year plunged 57 percent from a year earlier. Its 5.04 trillion won in net profit was the lowest since the third quarter of 2016.

“Samsung Electronics’ earnings fell since the third quarter of last year, and prices of shares and transaction value has dropped accordingly,” Lee Su-bin, an analyst at Daeshin Securities, said.

Yet analysts forecast the prices of Samsung Electronics’ shares to rise in the latter half of the year.

“Based on a recovering chip demand, the circumstances of the semiconductor industry are expected to improve,” Lee said.

Moody’s Investors Service said in a report it expects demand for memory chips to rebound in the second half, when data centers finish inventory adjustments.

When Samsung Electronics’ board of directors decided to carry out the stock split, they stated expectations for the split to add liquidity and marketability to the company’s shares.