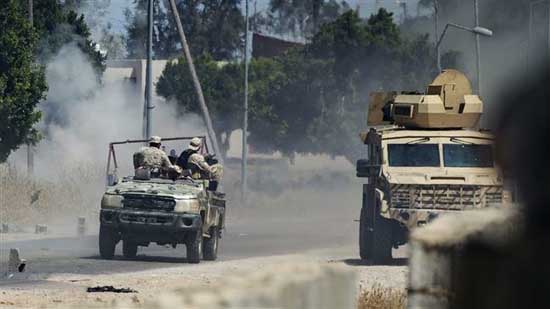 United Nations (UN) inspectors are reportedly probing missile attacks on Libya’s capital of Tripoli with the apparent use of drones used by the United Arab Emirates (UAE).

In a confidential report to the Security Council, a UN panel of experts said that it had inspected photographs of missile debris and identified the weapon as a Blue Arrow air-to-surface missile that had never been used in Libya in the past, AFP reported Tuesday, citing a leaked copy of the classified report.

The attack on the southern suburbs of Tripoli was carried out on April 19-20 by the so-called Libyan National Army (LNA) forces loyal to renegade strongman General Khalifa Haftar — who is backed by the UAE, Saudi Arabia, Egypt, and Washington — in efforts to capture the capital city from the internationally-recognized Government of National Accord (GNA) in the divided North African nation.

In a phone call to the Libyan general last month, US President Donald Trump “recognized Field Marshal Haftar’s significant role in fighting terrorism and securing Libya’s oil resources,” according to the White House. Saudi Arabia, the UAE and Egypt have also been praising Haftar’s field victories against other militia forces in the country.

Meanwhile, the Blue Arrow air-to-surface missile used in the attack by LNA forces is possessed by only three countries: China — which is its manufacturer — Kazakhstan, and the UAE, and is paired with the Chinese-built Wing Loong drone, press reports said.

“Probable use of Wing Loong UAV variants by the LNA, or by a third party in support of the LNA” is under investigation by the UN panel, said the report submitted Thursday to the Security Council.

The panel said, however, that it was “almost certain” that the missiles were not directly supplied to Libya by the manufacturer or by the Chinese government. It has also contacted Chinese authorities for information that could help identify the suppliers of the weapon.

The UN inspectors also pointed out that the use of the drones was “likely a recent non-compliance of the arms embargo as the weapon system reported on has not been identified in Libya before.”

Moreover, UN Secretary-General Antonio Guterres renewed on Monday his call for a ceasefire and for an end “to foreign interference to allow Libyans to be able to once again come together” and find a political solution.

Since April 4, fighting between the LNA and GNA forces has killed at least 432 people, wounded 2,069, and displaced more than 50,000, according to the UN.

Haftar’s LNA forces launched the offensive to seize Tripoli on April 4. In a message late Sunday, he called on his forces to “uproot” GNA troops from “our beloved country.” The attack, however, appears to have mired after GNA forces in the capital put up strong resistance.

Haftar’s message came just hours after the UN mission in Libya called for “an extendable one-week humanitarian truce” to mark the beginning of Ramadan.