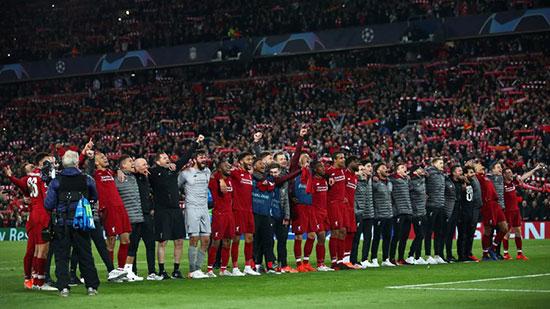 Liverpool went into the match at Anfield trailing 3-0 from the first leg and deprived of injured star attacking duo Mohamed Salah and Roberto Firmino.

Liverpool produced one of the most stunning comebacks in Champions League history to beat Barcelona 4-0 and progress to the final for the second consecutive year on Tuesday as stand-in striker Divock Origi and substitute Georginio Wijnaldum both scored twice. Liverpool went into the match at Anfield trailing 3-0 from the first leg and deprived of injured star attacking duo Mohamed Salah and Roberto Firmino. However, Origi – making a rare start – and substitute Wijnaldum both netted twice as Barca for the second season in succession surrendered a three-goal first-leg lead to exit the Champions League.

“With any other team I wouldn’t think it was possible. They are really mentality giants,” Liverpool manager Jurgen Klopp said. “It is unbelievable the season we had, the games we had, the injuries we had now.

“Going out there and putting in a performance like this on the pitch is unbelievable. I am really proud to be the manager of this team.

“What they did tonight was really special. I will remember it forever.”

Jurgen Klopp says Liverpool ‘feel it more than others’ after an emotional night at Anfield saw them beat Barcelona 4-0 at reach the Champions League final, despite losing the first leg 3-0.

Liverpool will face either Dutch side Ajax or Premier League rivals Tottenham in the final on June 1 in Madrid and will likely be favourites to be crowned European champions for the sixth time.

The Reds’ stunning victory brought back memories of when they last lifted the trophy in 2005 when they overturned a 3-0 half-time deficit in the final against AC Milan in Istanbul.

However, Klopp underlined the importance of his side writing their own history even if their bid for a first Premier League title for 29 years falls short behind Manchester City this weekend.

“We believed in this chance, we didn’t compare it with Istanbul or whatever,” added Klopp. “We want to create our own history. We need new chapters obviously and the boys did it.”

Despite the despondency of losing Salah and Firmino, Klopp’s men never lost faith and were accompanied by a typically raucous Anfield atmosphere for a European night.

Origi would almost certainly not have started had Salah and Firmino been fit.

But the 24-year-old Belgian has made a habit of scoring important goals in Liverpool’s title challenge and had his first ever in the Champions League on seven minutes on the rebound after Marc-Andre ter Stegen had denied Jordan Henderson’s initial effort.

“We know this club is the mix of atmosphere, emotion, desire and football quality. You cut off one and it doesn’t work, we know that,” Klopp said.

“This club has a big heart. The heart was pounding like crazy, you could hear it and feel it all over the world. I am so happy we could give the people this experience.”

Barcelona boss Ernesto Valverdewas left to face up to the second major European embarrassment of his time in charge.

The Spanish champions blew a 4-1 first-leg lead to bow out at the quarter-finals against Roma last year.

“The most hurtful thing is to repeat it,” said Valverde, who may struggle to hold on to his job despite guiding Barca to two La Liga titles.

“When you have a collapse of this nature we will have a few horrible days ahead.”

His side were left to rue not taking their chances in the first half after weathering Liverpool’s early burst.

Lionel Messi had seemingly turned the tie in the Catalans’ favour late in the first leg with a brilliant free-kick and his first effort was tipped over by Alisson Becker before the Brazilian denied his international teammate Philippe Coutinho.

Liverpool were seemingly dealt another injury blow as Andy Robertson was withdrawn at half-time, but he made way for Dutch international Wijnaldum with James Milner moving to left-back.

Wijnaldum’s impact was massive. He was picked out by Trent Alexander-Arnold’s low cross and drilled under Ter Stegen. And from Liverpool’s next attack, Xherdan Shaqiri picked out Wijnaldum to head home at the Kop end.

“Once again we showed that everything is possible in football,” said Wijnaldum.

“I was really angry at the manager that he put me on the bench but I had to do something to help the team when I came on.”

Valverde tried to restore some order as Coutinho, who cost £142 million ($186 million) when moving from Liverpool to Barcelona in January 2018, was replaced for the second time in the tie.

The change briefly had an impact, but Barca were inexplicably caught cold from a quick Alexander-Arnold corner 11 minutes from time that picked out Origi completely unmarked to fire high past Ter Stegen.

“A genius moment,” Klopp of Alexander-Arnold’s quick thinking. “I saw the ball flying in the net and had no idea who took the corner and who scored the goal.”