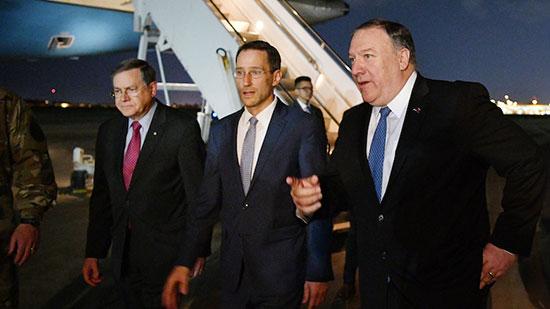 Earlier on Tuesday, the State Department announced that Pompeo—who had been in Finland to attend a Foreign Ministers conference of Arctic Circle countries—had cancelled a scheduled visit to Germany that day “due to pressing issues.”

The State Department did not reveal to where Pompeo was traveling instead of Germany, standard practice for visits of high-level US officials to Iraq and Afghanistan.

Pompeo’s visit to Baghdad comes as tensions between the US and Iran are increasing. On Sunday evening, in a highly unusual move, White House National Security Advisor John Bolton issued a statement saying that the US was moving an aircraft carrier strike group and a bomber task force to the Middle East in response to threatening moves from Iran.

Bolton did not provide further details, but CNN reported on Tuesday that “intelligence showing that Iran is likely moving short-range ballistic missiles aboard boats in the Persian Gulf” was a key reason for the US decision.

In response, the US is considering moving additional anti-missile defense systems to the region, CNN said, citing Pentagon officials who believe that US and coalition forces in Saudi Arabia, Bahrain, and Qatar could be targeted by Iranian missiles.

The heightened strains come, as the US has ramped up political and economic pressure on Iran. On Monday, Washington announced the end of all sanctions waivers that had previously been granted to countries importing Iranian oil, including Turkey. In addition, last month the US declared Iran’s Islamic Revolutionary Guard Corps to be a terrorist organization.

Also, Wednesday marks the first anniversary of the Trump administration’s withdrawal from the Iranian nuclear deal, formally known as the Joint Comprehensive Plan of Action (JCPOA.)

Iran’s state news agency announced on Tuesday that President Hassan Rouhani would deliver a speech on Wednesday, in which Iran will announce plans to “diminish its commitments” to the JCPOA, which was concluded in 2015 between Iran, on the one hand, and the US, UK, France, Germany, China, and Russia, on the other.

France has warned that international sanctions could be reimposed on Iran, if it takes steps in violation of the JCPOA.

“We do not want Tehran to announce tomorrow actions that would violate the nuclear agreement, because in this case we Europeans would be obliged to reimpose sanctions as per the terms of the agreement,” an official French source told Reuters on Tuesday.