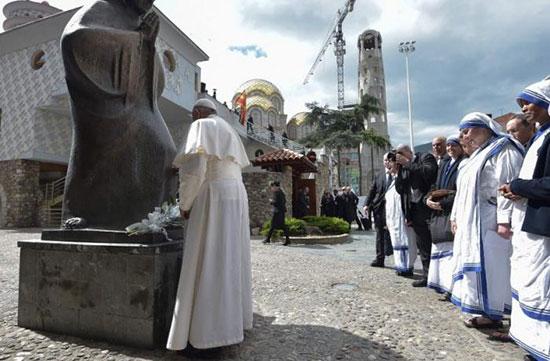 Francis in Skopje, the birthplace of the Saint, blessed the first stone of the sanctuary dedicated to her. “From here we pray to you: intercede with Jesus / so that we also obtain the grace / to be vigilant and attentive to the cry of the poor, / of those who are deprived of their rights, / of the sick, the marginalized, the last”.

Skopje (AsiaNews) – It is linked above all to Mother Teresa, defined today as “the praying voice of the poor / and of all those who are hungry and thirsty for justice”, Francis’s visit to northern Macedonia, the second country on this Papal trip. Skopje is in fact the city where the saint of the poor was born on 26 August 1910 and here today Francis blessed the first stone of the future Shrine dedicated to her.

Having arrived in Skopje shortly after 8 and after the welcome ceremony, Francis went to the Mother Teresa Memorial, where he was welcomed by Sister Mary Prema Pierick, general superior of the Missionaries of Charity. With her he went to the statue of Saint Teresa of Calcutta and laid flowers (in the photo)

He then went to the chapel inside which were the leaders of the religious communities present in the country and two relatives of Mother Teresa. A relic of the Saint was placed on the altar, some personal items and five candles to represent religious confessions.

After a moment of silent prayer before the relic, the Pope went out into the courtyard where there were a hundred poor assisted by the Sisters of Charity. Francis stopped to greet them, blessed the first stone of the sanctuary building and recited the prayer that we publish in full:

” God, Father of mercy and all goodness,

we thank you for giving us the life

and the charism of Saint Mother Teresa.

In your boundless providence, you called her

to bear witness to your love

among the poorest of the poor in India and throughout the world.

She was able to do much good to those in greatest need,

for she saw in every man and woman

the face of your Son.

Docile to your Spirit,

she became the prayerful cry of the poor

and of all those

who hunger and thirst for justice.

Taking up the words uttered by Jesus on the cross:

the thirst of the crucified Lord

by accomplishing works of merciful love.

mother of the poor,

we ask for your special intercession and help,

here in this city where you were born,

where you had your home.

Here you received the gift of rebirth

in the sacraments of Christian initiation.

Here you heard the first words of faith

in your family and in the community of the faithful.

Here you began to see

and meet people in need,

the poor and the helpless.

Here you learned from your parents to love

those in greatest need and to help them.

Here, in the silence of the church,

you heard the call of Jesus to follow him

as a religious in the missions.

Here in this place,

we ask you to intercede with Jesus,

that we too may obtain the grace

to be watchful and attentive to the cry of the poor,

those deprived of their rights,

the sick, the outcast and the least of our brothers and sisters.

May he grant us the grace to see him

in the eyes of all who look

to us in their need.

May he grant us a heart capable of loving God

present in every man and woman,

a heart capable of recognizing him in those

who experience suffering and injustice.

May he grant us the grace

to become signs of love and hope in our own day,

when so many are poor, abandoned,

May he grant that our love not only be on our lips,

but that it be effective and genuine,

so that we may bear

credible witness to the Church

whose duty it is to proclaim the Good News to the poor,

freedom to prisoners, joy to the afflicted

and the grace of salvation to all.

for this people, for its Church

and for all those who wish to follow Christ,

the Good Shepherd, as his disciples,

by carrying out works of justice, love,

To follow him, who came not to be served but to serve,

and to give his life for many: