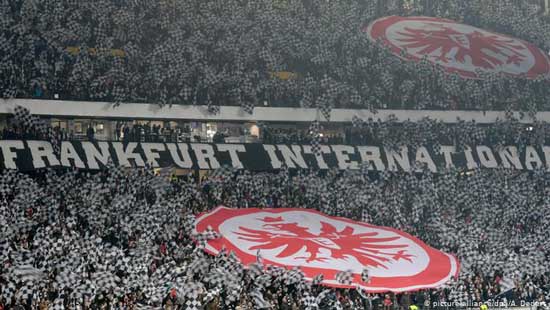 Thirty-nine years after Eintracht Frankfurt’s historic UEFA Cup triumph over Borussia Mönchengladbach, the Eagles are ninety minutes away from another major European final – and a whole city holds its breath.

For the Frankfurter Neue Presse, the Europa League semifinal second leg against Chelsea at Stamford Bridge is “the game of the year” for Eintracht Frankfurt.

For the Frankfurter Allgemeine Zeitung, it’s “the biggest in 40 years.”

For coach Adi Hütter and his players however, there are more pressing concerns. After four Bundesliga games without a win – the latest a 6-1 thrashing in Leverkusen on Sunday – a season in which Eintracht have exceeded their own expectations is threatening to derail at the very last.

The defeat saw Leverkusen move level on points with Frankfurt in fourth with two games remaining, while the score-line reduced Eintracht’s goal difference advantage over the Werkself to just five.

“The worse half of football in my career,” was how Hütter described the opening 45 minutes at the BayArena in which his reshuffled team conceded six goals, admitting afterwards that his unusually defensive tactics were “not particularly expedient.”

“It’s like in boxing,” sporting director Fredi Bobic told the Frankfurter Rundschau after the Leverkusen defeat. “We’ve been knocked down but we’ll get back up and approach Thursday’s game positively. We want to convert our anger into positive energy.”

Suddenly, qualification for the Champions League via the Bundesliga is in doubt – and it won’t be easy via the Europa League either, where Eintracht will have to score at least once in London.

Despite taking the lead in the first leg through Luka Jovic, Frankfurt were pushed back in the second half and had goalkeeper Kevin Trapp to thank that Chelsea only scored one. But they face an uphill battle.

Hütter gave his players the day off on Tuesday, a chance to clear their heads before training in London on Wednesday evening. “We’ve tried to move on from Sunday as quickly as possible,” he said at Tuesday’s press conference, promising that his team will show “a different side” and will play with the “passion and desire” that has characterized them throughout this season.

“Miracles can happen,” he added, referring to Liverpool’s sensational Champions League comeback against Barcelona. “But to produce a miracle, we need to play a perfect game, keep Chelsea at bay and score one goal.”

In that endeavor, Jovic will be boosted by the return of strike partner Ante Rebic after the Croatian World Cup runner-up missed the first leg through suspension. “[Rebic’s] pace and power will help us a lot,” said Hütter, who also didn’t rule out a return for the injured Sebastien Haller.

One thing Frankfurt can definitely rely upon is the support. The last time a Bundesliga side traveled to London for a Europa League fixture, they were accompanied by an estimated 20,000 euphoric supporters as Cologne fans took over Arsenal’s Emirates Stadium in September 2017.

The away following at Stamford Bridge on Thursday will again be numerous and the atmosphere in the Shed End raucous, although the numbers will fall short of Cologne. Not because Frankfurt are in any way smaller; quite the opposite, arguably. But the circumstances are different.

With over 15,000 applications for just 2,235 tickets, the official away end was vastly over-subscribed. But Stamford Bridge is smaller than the Emirates and there will have been significantly fewer tickets available in the home end for Frankfurt fans to snap up, especially for a semifinal.

Thousands will still travel to see their team’s biggest game of the year, the biggest game in 40 years, depending which newspaper they read. For the majority, it will certainly be the game of their lives.