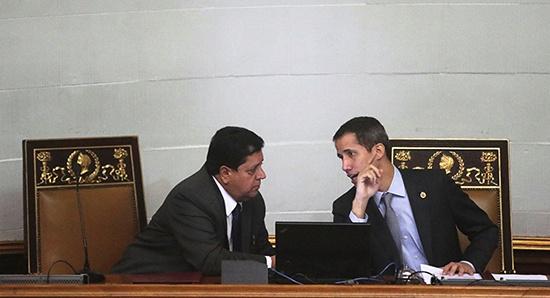 The Venezuelan Constituent National Assembly has removed parliamentary immunity from seven opposition lawmakers who supposedly took part in the recent failed coup in the country. Among those who lost their immunity was Edgar Jose Zambrano, who serves as a National Assembly deputy.

CARACAS (Sputnik) — Edgar Zambrano, the deputy speaker of the Venezuelan opposition-controlled National Assembly, has been detained in the wake of the failed coup in the country, Diosdado Cabello, the head of the government-led National Constituent Assembly has said.

“I am informing you that several minutes ago, one of the leaders of the government overturn of April 30… Edgar Zambrano… was detained,” Cabello said live on a state-run TV channel on Wednesday.

Earlier, self-proclaimed president of Venezuela, Juan Guaido, turned to Twitter, saying that the “vice president” of the opposition-controlled National Assembly had been detained by authorities from President Nicolas Maduro’s government.

Edgar Zambrano, the assembly “vice president”, said on Twitter that agents from the SEBIN intelligence agency had surprised him and, after refusing to let him out of his vehicle, were using a tow truck to take him to the SEBIN’s Caracas headquarters, Reuters reported.

The prosecution charges them with high treason, public conspiring to violate the law, inciting civil uprising, power usurpation and other crimes.

Venezuela has been rocked by unrest since January when Guaido proclaimed himself the country’s interim president and was recognized by the United States and dozens of other nations.

Maduro, recognized by China and Russia among numerous other countries, has accused the United States of seeking to overthrow his government and install Guaido in a bid to get hold of Venezuela’s natural resources.

Guaido made a fresh attempt to depose Maduro on April 30, staging a demonstration in front of La Carlota military base in Caracas. However, the attempt has “failed completely,” as the Venezuelan government has put it. The office of the Venezuelan prosecutor general has requested 18 arrest warrants to be issued in connection with the coup attempt.