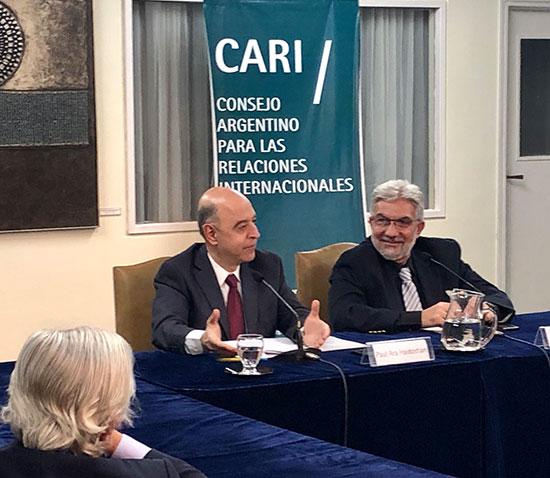 Haigazian University president, Rev. Dr. Paul Haidostian, paid an eight-day visit (April 22-30) to Argentina. The main mission of the trip was to establish academic and cultural links between Haigazian University and a number of universities, research centers, academicians and Armenian and Lebanese community organizations in the cities of Buenos Aires and Rosario.  President Haidostian’s itinerary included an academic session in Buenos Aires at the Argentine Council for International Relations (CARI), on the Role of the Christians of the Middle East in Regional Development and Stability.  While in Buenos Aires, he also visited organizations of the prominent Armenian community such as the HMEM, the AGBU, the UCA Marash, the Armenian Center, and the Armenian National Committee of South America, as well as the Embassy of the Republic of Armenia, and the Club Sirio Libanes. He joined a meeting of the Armenian Institutions of the Republic of Argentina (IARA) that gathers together representatives of all Armenian organizations and instrumentalities of Argentina. He was able to meet with a number of scholars of the Armenian Genocide there.  In many of the meetings and events, President Haidostian was accompanied by HU alumnus, Dr. Khatchik Der Ghougassian (Class of 1985).

While in Rosario, President Haidostian was hosted by the Armenian Chair of the National University of Rosario.  The focus of this part of the trip was three-fold. First, to meet with the presidents of two universities and to sign academic cooperation MOUs with both the National University of Rosario (UNR) and the UCEL (University of the Latin American Education Center); second, to deliver the inaugural lecture at the “Armenian Issue and International Relations” 2019 Seminar at UNR, and lecture at an event that UCEL and UNR had co-organized with  the Armenian and Lebanese community associations of Rosario; third, to participate and speak at two events dedicated to the 104th anniversary of the Armenian Genocide. The first event was held at the Armenian Monolith of Rosario with the participation of dignitaries of the city and the Armenian and Lebanese communities, and the second, at the Museum of Memory in Rosario. Dr. Haidostian spoke on themes that ranged from Armenian Diaspora issues, to Lebanese and Armenian topics.

While in Buenos Aires, President Haidostian had the opportunity to visit the Armenian Evangelical Holy Trinity Church and deliver the sermon at the special worship service dedicated to the Armenian Genocide. The visit to Argentina coincided with the visit of the Foreign Minister of the Artsakh Republic, Mr. Masis Mayilyan and the accompanying delegation. The two men had multiple occasions to discuss the internship program that Haigazian University had started in April 2019 for the staff of the Ministry.

It is expected that the academic cooperation between the universities and organizations of South America and Haigazian University will focus mainly on Armenian studies, international relations, and the study of Lebanese and Armenian diaspora and immigration issues.