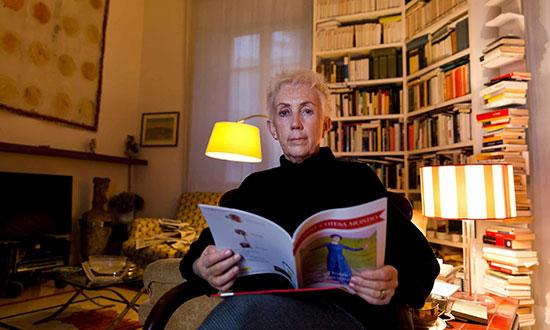 In the church women’s magazine, Lucetta Scaraffia exposed rape and secret abortions. Then, she and her team quit. She reveals what happened

On 26 March, Lucetta Scaraffia sent a letter to Pope Francis. She was, at the time, the editor of the Vatican’s glossy women’s magazine Women Church World: a title that in its seven years had taken aim at misogyny in the church, exposed the shocking sexual abuse of nuns and the secret abortions priests had paid for to get rid of the evidence.

“We are throwing in the towel,” she told the pope. “Because we feel surrounded by an atmosphere of distrust and progressive delegitimisation.” The “we” was the 11-strong editorial team, all but two of whom quit on the same day, accusing the church elders of attempting to gag them. “A vital initiative has been reduced to silence and there has been a return to the antiquated and arid custom of choosing women considered trustworthy from on high, under the direct control of men.”

I meet Scaraffia, 70, in her home in the plush Parioli district of Rome. She is softly spoken, but strong willed, maintaining that it was the right thing to do to leave the magazine. “We were free before, we got on with our work without any pressure. But in the end, they left no space for autonomy.”

A religious magazine that focused on women’s issues was Scaraffia’s idea to begin with. In 2007, she became the first female contributor to the Vatican’s daily newspaper, L’Osservatore Romano. L’Osservatore primarily covers the work of the pope and the Roman Catholic church, but she saw a space for a publication dedicated to women. It was proposed to Pope Benedict XVI, who gave his approval. “There are so many more women working within the church than there are men, doing interesting and intelligent things, but nobody knows about it,” Scaraffia says. “The magazine set out to give a voice to these women.”

Scaraffia’s editorship was bold; the more fearless she became, the more feathers she ruffled. A year or so into the magazine’s existence, she began to call out misogyny in the church. Then came an article in March 2018 that denounced the servitude of nuns who work for a pittance to cook and clean for clerics.

“This created so much embarrassment and hostility in the Catholic hierarchy as the priests thought it was their right to have an unpaid nun serving them. They believe that women become nuns to serve them; it’s a mistaken belief but is very much rooted within the church,” says Scaraffia. “Women become nuns because they have a vocation and want to help those who are suffering or fragile, not to serve priests.”

Scaraffia went a step further in February with a scathing account of the numerous cases of nuns being raped or abused by priests and bishops, or being forced to have an abortion or leave the church if they became pregnant as a result. A few days after the article was published, Pope Francis acknowledged the issue of widespread abuse against nuns for the first time. He said more needed to be done to confront the issue, while pointing to the action taken by Pope Benedict XVI against a French order after nuns there had been reduced to “sexual slavery” by priests.

But, so far, there has been little evidence, at least publicly, of steps being taken to address the issue. “Nothing has been done, because there is the issue of nuns being forced into abortion [by clerics who rape and impregnate them]. The priests pay for them to have an abortion – if that is further exposed it would be very bad, and so they keep silent,” she says.

Scaraffia and her team never took salaries. All maintained other jobs – Scaraffia as a history professor at Rome’s Sapienza University – and were only paid for the articles they produced. “We were a very close group,” she says. “We discussed the important themes for women today, we read, we spoke to people. It was a profound job.”

We sit in Scaraffia’s living room, where books line almost every inch of the walls. She was brought up a Catholic but stopped going to church when she started university. She wouldn’t return to religion until after the birth of her daughter in her mid-30s. “I was young and rebelling against everything,” she says. “At the time I didn’t know much about Christianity and the church. But as a professor, I studied saints and the history of the church and this got me closer to it again.”

Her university years coincided with the growing feminist movement in Italy in the late 1960s, and she became an active campaigner. “I got involved in political life at university and went to gatherings, but I always felt out of place. There was hardly any talk or debate about women,” she says. “But at feminist meetings, they spoke about things that affected me and interested me. This is where I found the courage to start speaking publicly.”

Among these topics was sexual harassment. “I experienced sexual harassment, too. But in those times you didn’t report it, you just stayed silent and tried to avoid the person [who was harassing you].”

Describing herself as a “critic of feminism”, Scaraffia is not without her contradictions. She was among the campaigners who fought to legalise abortion in Italy in the late 1970s, yet she is against terminating pregnancies.

“I’m against abortion because I think it’s bad, but I don’t think women should be criminalised for it,” she says. “Feminist movements, not all, make a big error in thinking that abortion should be a right, because it’s not like that. Abortion is painful for women, it’s a heavy load to carry. I’m not the only feminist who thinks this.”

Besides abortion, Scaraffia has taken issue with the morning-after pill, which she says “is not a victory”. In respect of birth control “everything is on the woman’s shoulders”, she says. “It’s not true that women want to act like men at the sexual level, ie be promiscuous. Instead they are pressured into taking contraceptive pills and the morning-after pill.” She believes that surrogacy, too, should be a feminist sticking point. “Wombs-for-rent has become a new slavery of the woman’s body in front of our eyes, and few feminists have rebelled.”

Perhaps most controversially, she believes that feminist campaigns around workplace parity and equal pay have “negated motherhood” in their quest for women to be equal to men. “There are many feminist movements, not just one type … I agree with those who give a lot of importance to motherhood.” She is dogmatic in her stance, which is difficult to swallow given it was feminists campaigning for better maternity rights that allowed women who work – like herself – to have children.

That said, her bravery in speaking out against the church’s abuse of nuns does have echoes of the #MeToo movement. But its fervour hardly reached Italy, let alone the Catholic church – and her reaction to it is again controversial. “In some ways #MeToo has been positive, for example in exposing people,” she says. “But there is also the issue of false accusations. This is a problem that needs to be recognised as not everything that people say is true.”

To speak to Scaraffia often feels like navigating a moral maze. One moment, you feel like you are talking to a classic women’s libber who is radically challenging the status quo of an arcane institution that actively excludes women with the remaining ban on women priests, the other she is damning #metoo. Her overall premise is, whether within the church or outside, that feminism isn’t about women being like men, but equal to men. For her, the biggest feminist victory has been education. “Women are much more educated now – if they win this, they win everything”.

One thing that she is clear on, however, is that women should not be pitted against each other. She claims that attempts to curtail the editorial freedom of Women Church World began when Andrea Monda, a Rome school teacher, was brought in to edit L’Osservatore in 2018 after Giovanni Maria Vian was sacked by Pope Francis after an 11-year term. Vian was also a fearless editor, not only introducing coverage of women’s issues but raising eyebrows by running a eulogy to Michael Jackson in 2009 as well as an article praising the Harry Potter series, and a book review on Oscar Wilde in which the Irish author was described as “one of the personalities of the 19th century who most lucidly analysed the modern world”.

Monda is alleged to have exerted indirect pressure by hiring staff who Scaraffia described as “obedient” women “with an editorial line opposed to ours” to write for the main newspaper.

Monda denied interference in the editorial process, saying in a statement: “In the few months since I was appointed director, I guaranteed to Professor Scaraffia, and to the women’s editorial team, the same total autonomy and the same total freedom that have characterised the monthly supplement since the day it was born.” Monda added that the magazine would continue under a new team. “I can assure you that the future of the magazine is not in question,” he said. Last week, a new editor was appointed.

In the wake of the resignations, Scaraffia was criticised for her comments against the female writers introduced by Monda and accused of being a workplace prima donna. There has also been speculation that her bitterness derived from Vian’s dismissal and her subsequent loss of influence over some of L’Osservatore’s coverage. She dismisses the criticisms as “slanderous”, adding that she naturally feared changes after Vian left, as “he had always respected and supported our work”.

She is clearly disappointed that it ended this way, especially after founding the magazine. “The magazine was very much appreciated by my readers,” she says, adding that under her editorship it went on to be distributed in Latin America, Spain and France.

Her time may be over at Women Church World but Scaraffia is determined to continue her work. She meets regularly with her former colleagues at the magazine as they move towards setting up a foundation that would include the creation of a masters’ degree aimed at women working in the church. “The plan is to be able to teach all that we have accumulated.” It seems it would take a lot to keep Scaraffia quiet.