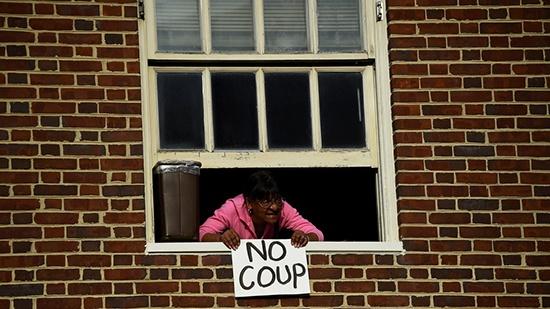 The Venezuelan Embassy in Washington DC was plunged into darkness after the US authorities shut down power in the building. The anti-coup activists hunkered down inside say they are not leaving despite the blackout.

After weeks of tense standoff between the ‘Embassy Civilian Protection Collective’ and supporters of US-backed opposition leader Juan Guaido outside the Venezuelan diplomatic compound, the US authorities attempted to drive the temporary occupants out by depriving them of electricity.

In a statement on Twitter posted by one of the group’s members, independent journalist Alex Rubinstein, an activist says that the loss of electric power won’t coerce them into abandoning their mission – to protect the embassy from a takeover by Juan Guaido appointees.

“We expected this, we’ve prepared for it and we are not living,” the activist is seen saying in total darkness, his face lit by a candle.

Statement from the Embassy Protection Collective after US authorities cut the power to the besieged Venezuelan embassy in Washington, DC. pic.twitter.com/TFqyDcIf7K

He compared the shutdown to the alleged US attacks on Venezuela’s infrastructure.

“It’s ironic that the US government attacked Venezuela’s electric grid and now they are attacking the embassy of Venezuela’s electricity,” he said. Caracas previously blamed the US for inciting sabotage and waging an “electricity war”against Venezuela after it suffered several country-wide power outages in a row due to some of its key infrastructure being crippled.

The activists in the embassy are staying put despite the cut-off.

“We are not leaving. We are gonna resist. We are going to stay in solidarity with Venezuelan people and elected government of Venezuela,” the activist in the video says.

The blackout was reportedly ordered by Guaido’s ‘ambassador’ to Venezuela, Carlos Vecchio, who announced the move to loud applause and cheers from the crowd outside the building.

“We have decided to give them a bit of the experience of living in Venezuela under the failed socialism of Maduro. As of this moment they will not have electric power. Next step: your exit ,” Vecchio tweeted.

Last week, the US State Department urged the activists to vacate the premises, calling them “trespassers” and claiming that self-proclaimed “interim president” Guaido “has legal authority” over the embassy. On Friday, Republican Congressman Scott Tipton asked US Secretary of State Mike Pompeo to evict the Collective. However, Washington has made no attempt to forcibly remove them.

The Collective says they were given permission by the Venezuelan Foreign Ministry to move in after the last diplomats loyal to Maduro left for Caracas late April, having been expelled by the US. Since the botched coup attempt on April 30, tensions outside the embassy have been running high.

Pro-Guaido protesters have made a human chain to stop people from sneaking food and basic supplies, such as tampons and toothbrushes, into the embassy. Several activists, including Code Pink’s national co-director, were briefly detained as they attempted to throw food and supplies to the besieged members of the Collective from the outside. The Secret Service has been on stand-by at the embassy to prevent possible skirmishes between the two rival groups.