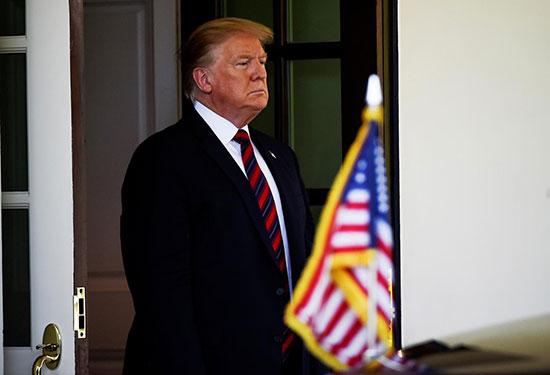 NEW YORK (Reuters) – The number of Americans who said President Donald Trump should be impeached rose 5 percentage points to 45 percent since mid-April, while more than half said multiple congressional probes of Trump interfered with important government business, according to a Reuters/Ipsos poll released on Thursday.

The opinion poll, conducted on Monday, did not make clear whether investigation-fatigued Americans wanted House of Representatives Democrats to pull back on their probes or press forward aggressively and just get impeachment over with.

The question is an urgent one for senior Democratic leaders in the House of Representatives, who are wrestling with whether to launch impeachment proceedings, despite likely insurmountable opposition to it in the Republican-controlled Senate.

On Thursday, House Speaker Nancy Pelosi re-emphasized that the leaders of the investigative committees in the Democratic-controlled House were taking a step-by-step approach.

In addition to the 45 percent pro-impeachment figure, the Monday poll found that 42 percent of Americans said Trump should not be impeached. The rest said they had no opinion.

In comparison, an April 18-19 survey found that 40 percent of all Americans wanted to impeach Trump.

The latest poll showed stronger support for impeachment among Democrats and independents.

It also showed that 57 percent of adults agreed that continued investigations into Trump would interfere with important government business. That included about half of all Democrats and three-quarters of all Republicans.

After a nearly two-year investigation by Special Counsel Robert Mueller of Trump and Russian interference in the 2016 U.S. election, House Democrats are pursuing multiple inquiries into Trump’s presidency, his family and his business interests.

Trump is stonewalling at least a half-dozen such inquiries, refusing to disclose his tax returns, invoking executive privilege to keep the unredacted Mueller report under wraps and filing unprecedented lawsuits to block House investigators.

“It’s becoming a circus over there” in Washington, said Fatima Alsrogy, 36, a T-shirt designer from Dallas who took the poll. “There are so many more important things the country needs to pay attention to right now.”

Alsrogy, an independent, thinks Trump should be impeached. Yet she also wishes lawmakers would do more to improve the healthcare system for self-employed people like her.

“I bought my own (health) insurance on an Obamacare exchange,” she said. “It’s a huge expense, and I don’t know if Obamacare is going to be amended or taken away. It’s stressful.”

Trump’s popularity was unchanged from a similar poll that ran last week – 39 percent of adults said they approved of Trump, while 55 percent said they disapproved.

The Reuters/Ipsos poll was conducted online in English, throughout the United States. It gathered responses from 1,006 adults and had a credibility interval, a measure of precision, of about 4 percentage points.