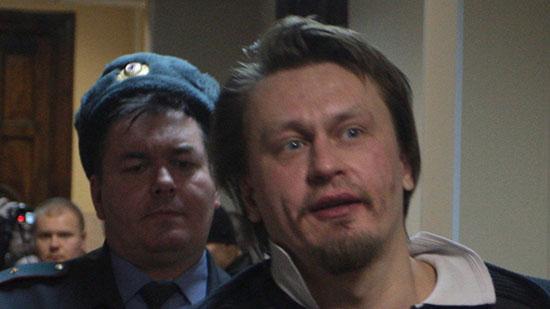 Oleg Vorotnikov, founder of the Russian art group Voina, known for its brazen provocations and brushes with the law, has been charged by Austrian police with creating and running a militant anti-fascist group and arms trafficking.

In a statement on its website, Voina said that Austria has issued an international warrant for Vorotnikov’s arrest, who the police believe might be hiding from prosecution in one of the EU member states.

Citing a final version of the indictment, the group said that Vorotnikov has been charged with involvement in the creation and leadership of a militant group called “Der Krieg” (“The War” or “Voina” in Russian).

The group’s activity, according to the reported indictment, is aimed at inciting murder and violence, causing serious material damage to governmental property, military infrastructure, culture monuments and sites of religious worship as well as inflicting serious bodily harm on officials on duty and perpetrating a range of other offences.

Vorotnikov is also charged with arms trafficking on the territory of Austria. In a previous indictment filed in January, Vorotnikov was charged with weapons smuggling. However, that charge was dropped after all melee weapons and firearms seized from Vorotnikov at the time were found to be of Austrian origin.

In addition to that, Vorotnikov has been accused of dodging investigative procedures and resisting legal proceedings in his case. He faces five years in prison if found guilty of all charges.

It is far from the first time the Russian-born art provocateur has run into legal troubles. Since 2011 he has been wanted in Russia on charges of violence against and insult of law enforcement officials. After Vorotnikov together with his wife Natalia Sokol and their children fled Russia to Europe in 2013, he lived in several European countries. Since March last year he is reported to have been residing in Austria.

In September last year, Vorotnikov was briefly detained by the Czech authorities on the Russia-issued Interpol warrant.

His wife and fellow member of ‘Voina,’ Sokol, and their three children are currently in a jail in the Austrian city of Graz. Sokol was taken into custody in September as Vorotnikov’s alleged co-conspirator in establishing Der Krieg and illegal arms trafficking.

The group came to prominence in Russia in 2010 following the “D*ck captured by the FSB” stunt, when the activists painted a giant phallus on the drawbridge near the headquarters of the Federal Security Service (FSB).

While the names of Vorotnikov and Sokol are relatively obscure outside Russia, two former members of the group’s Moscow branch, Nadezhda Tolokonnikova and Yekaterina Samutsevich, have enjoyed worldwide fame as the members of Pussy Riot, a punk band notorious for its ‘punk prayer’ protest at the Cathedral of Christ the Savior in Moscow in 2012, which landed them in jail for several years.