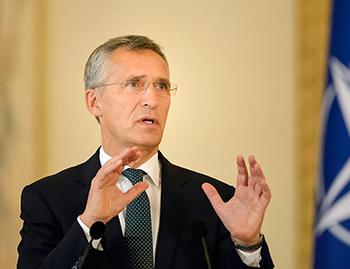 NATO is ready to give support in finding a solution to the current disagreement between Turkey and the U.S. on the issue of the Russian-made S-400 defense systems, NATOSecretary-General Jens Stoltenberg has said, stressing that potential U.S. sanctions will also harm the alliance.

NATO is ready to support if the U.S. and Turkey agree on establishing a technical committee for the evaluation of possible S-400 influences on F-35 fighter jets, the secretary-general told the Hürriyet Daily News.

“This is a Turkish proposal which has been put on the table. We need an agreement between the two allies directly involved, the U.S. and Turkey, to make any progress also on technical issues. We are, from NATO side, of course always ready to support and to help,” Stoltenberg said in an interview on May 7 in the southern province of Hatay, which he visited as part of his two-day trip in Turkey.

“I am concerned about the consequences of Turkey’s decision to acquire the S-400 air missile systems,” he said, recalling that the U.S. has indicated that they will impose sanctions against Ankara and not deliver the F-35 jets.  “I think we all understand that this is not good for the alliance,” he added.

He welcomed the U.S. and Turkey’s attempt to solve the issue and that Ankara is keeping dialogue with Italy and France on the possibility of acquiring a SAMP/T system from Eurosam open and has contacts with the U.S. on the possibility of purchasing Patriot batteries. The secretary-general recalled that NATO also provides support to Turkey with a Spanish Patriot battery in the southern province of Adana, a SAMP-T battery in the southeastern province of Kahramanmaraş and surveillance flights with AWACS aircraft.

Noting that NATO has augmented contribution to Turkish defense for several years now, Stoltenberg said, Turkey is a highly valued ally, therefore we will very much like to see that we are able to solve this issue related to the S-400.” Asked if NATO is engaged in diplomatic efforts to solve the dispute between the two allies,

Stoltenberg said he had talks with both sides as the case is also linked to the interests of the alliance.

Turkey’s purchase of the Russian surface-to-air S-400 system has led to significantly strained ties with Washington, which warned to suspend the delivery of the F-35 stealth fighter jets along with imposing sanctions under a 2017 sanctions law.

The U.S. argues that the Russian S-400 system is incompatible with NATO systems and exposes the F-35 to possible Russian subterfuge, including covert efforts to obtain critical information on the jet, which could then be relayed to Russia. In response, Turkey proposed to form a committee to examine technical concerns about its procurement of Russian missile defense system, but Washington is yet to give a response.

Stoltenberg reminded that NATO focuses on “interoperability” and wants to have systems that can work together.

“The S-400 system is not interoperable with NATO systems. That’s also a reason why we welcome the fact that Turkey is now looking into the possibility of buying either Patriots or Eurosam,” he added.

Asked about the possible influence on NATO defense capacity if the U.S. does not deliver the F-35 to Turkey, the secretary-general warned that it would be a “serious situation.”

“That’s the reason I am concerned about the consequences of the Turkish decision to acquire the S-400s. I think we should now focus on how we can avoid coming in such a situation and not speculate too much about what will happen if we do not succeed,” he said.

Elaborating on the messages he conveyed to President Recep Tayyip Erdoğan at their meetings in Ankara, the secretary-general said “My message is that I hope it’s possible to find a solution. Because that will be good for Turkey, for the U.S. and for the whole of NATO. We also discussed the strong commitment of Turkey to our shared security, to our NATOalliance and to our collective defense.”

Stoltenberg stated that the S-400 is an issue he had discussed several times with Erdoğan and President Donald Trump a few weeks ago in Washington. “NATO is always ready to support and help if that’s something which is wanted by both sides,” he said but avoided to go into details for these discussions.

Stoltenberg did not want to further elaborate on the details of possible formulae to ease this tension regarding the Russian systems. “It will not be helpful if we go into all the details in public. It would be more helpful if the U.S. and Turkey would sit down and try to look at the different aspects of this instead of having this conversation in the public domain. That’s not always the best way to solve difficult issues such as this.”