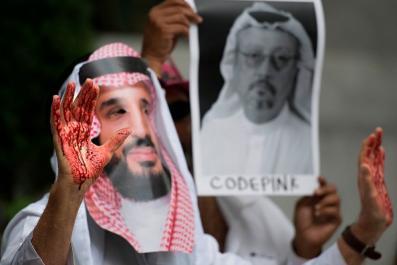 Saudi Arabia, bringing back memories of the grisly murder of Jamal Khashoggi and the grim reality that no one has been held accountable.

When Saudi Arabia, or rather Crown Prince Mohammed bin Salman (MBS), ordered the torture and murder of dissident journalist Jamal Khashoggi in the Saudi embassy in Istanbul, we warned that the message Saudi was sending is that no critic of MBS is safe.

Now, it seems that Ilyad el Baghdadi, a Palestinian-born pro-democracy activist living in Norway, has received a warning from the Norwegian government, via the CIA, that his life is in ‘potential danger’ from Saudi Arabia.

The threat, which Baghdadi became aware of on the 25th of April, was of such a severe nature that Norwegian authorities whisked him away to a safe location.

This isn’t the first time Baghdadi has fallen foul of autocrats in the Arab world.  The reason he resides in Norway is due to his arrest and expulsion from the UAE in 2015 due to his high-profile support for the Arab spring.  It was in Norway that he sought asylum – Europe is supposed to be a safe haven for those who flee terror, but whether you’re an intellectual like Baghdadi or simply someone fleeing genocidal war, those days are long gone.

Since his rise in Saudi, Baghdadi has been a consistent critic of MBS and the actions and nature of his regime, with the activist telling the Guardian, “if they don’t want to kill me then I am not doing my job.”

As is ever the case with the gormlessly thuggish MBS and his entirely superficial ‘reform agenda’, the irony of Baghdadi warning that they were capable of assassinations abroad will be lost on him.

Though Saudi’s brutality at home is hardly a surprise, in the era of the Arab spring and the rise of the self-styled though entirely phoney ‘reformist’ MBS, the Kingdom, along with their allies in the UAE, has reacted to movements of autonomy in the region by going on the offensive.

In recent years the Saudi-UAE axis has sponsored or fomented counter-revolution in Egypt, Libya, Bahrain, Tunis and, last and worst, Yemen, where it continues to carry out a near-genocidal war.

But the murder of Khashoggi, while intimately related to the above activity, was a different kind of escalation from the Kingdom. It was MBS flexing his muscles globally – showing that the Kingdom’s long, cruel reach can be extended to individual critics in apparently ‘safe’ countries.

But there’s an underlying dynamic to all this that makes it all the more sinister. We all know that Trump is perfectly willing to side with foreign leaders over his intelligence services, as he did in Helsinki with his endorsement of Putin’s absurd denials of cyberwarfare against the evidence provided to him by his state.  And we see a similar dynamic with Saudi Arabia.

Despite the CIA concluding that Khashoggi was murdered on the direct orders of MBS, Trump in his typical style of cognitive dissonance denied that they had concluded any such thing.  Trump claimed the CIA had ‘feelings’ rather than evidence on the matter and, like a broken record, accused the media of reporting ‘fake news’ on the subject.

It was thus entirely unsurprising that when the Trump administration, which had spoken big but empty words about demanding accountability from MBS, sanctioned those identified as responsible for the death of Khashoggi, MBS was not included. Essentially, the Trump administration had helped the crown prince get away with murder and further demonstrated that he’s untouchable.

The fact that the warning of a threat against Baghdadi’s life came from the CIA, of which Saudi is an ally, demonstrates the terrifying reality that mere chance and not any kind of formal curtailing by the US of Saudi potentially saved the life of Baghdadi.

Those who think the US has ultimate control over its tyrannical MENA allies have always overestimated the power of the US and underestimated the autonomy of entities like Saudi. Saudi is acutely aware of how important it is to the US, both economically and strategically, as a lynchpin in preserving the global authority of the US.

Just a week ago, we saw how Trump was influenced by Saudi, the UAE and Sisi regarding a possible designation of the Muslim Brotherhood as a ‘terrorist organisation’.

This might seem all very strange for the self-described ‘America First’ president – that his foreign policy at times seems to be so often pulled by foreign influences.  But it’s not strange at all; in fact, though there’s a significant element of Trump somewhat cluelessly siding with the Saudi-UAE agenda, the reality is that there’s a confluence of interests between them, ranging from Trump’s domestic Islamophobic agenda aligning with Saudi’s counter-revolutionary agenda against the Brotherhood, to their shared will to confront Iran.

This is the era where the US allows its so-called ‘enemies’, namely Assad, Iran and Russia, to get away with genocide, and where Russia can carry out a fatal chemical weapons attack targeting dissidents in the heart of England, so what chance is there for it ever sticking up for those souls who fall victim to its allies?

We live in an age of rising global authoritarianism, and the reality is that the world has become more welcoming to tyranny than to its victims. It was only last month that 37 Saudi dissidents were executed en masse by the Saudi regime while the world turns a blind eye.

Given the fact that MBS got away with the Khashoggi murder entirely unscathed, and with business as usual continuing between the world and Saudi after largely symbolic acts of outrage, we can only hope the next target of Saudi’s global reign of terror is as lucky as Baghdadi.

We welcome all pitches and submissions to TRT World Opinion – please send them via email, to [email protected]

Sam Hamad -Sam Hamad is a Scottish-Egyptian writer based in Edinburgh.

Bullets Are Not the Seeds of Life