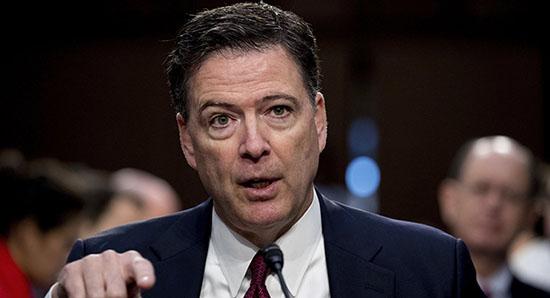 James Comey was fired two years ago for his alleged mishandling of the 2016 Hillary Clinton email probe, but he suggested that his dismissal had something to do with the way he carried out the FBI investigation into alleged ties between the Trump campaign and Russia.

US President Donald Trump lashed out at former FBI Director James Comey after he assumed that the president may have illegally obstructed justice during the FBI’s two-year Russiagate investigation.

“James Comey is a disgrace to the FBI & will go down as the worst Director in its long and once-proud history. He brought the FBI down, almost all Republicans and Democrats thought he should be FIRED, but the FBI will regain greatness because of the great men & women who work there!” Trump tweeted on Thursday.

Trump’s rant came hours after Comey said at a CNN town hall that he believed that the POTUS appeared to have obstructed justice.

“It sure looks like he did, in connection with a couple of episodes,” Comey said, referring to the ten potential instances detailed in the Mueller Report where Donald Trump may have attempted to frustrate the probe into whether his campaign colluded with alleged Russian hackers during the 2016 election.

Comey also surmised that Trump would have faced obstruction of justice charges if he were not a sitting president.

Donald Trump sacked Comey from his role as FBI director on 9 May 2017, saying he was unfit for the position. Ostensibly, he was dismissed because of the way he treated the Hillary Clinton email probe during the 2016 campaign — in other words, was too soft and did not recommend that criminal charges be brought against her.

Comey, at the time of his dismissal, was leading the Russiagate probe. In his testimony to Congress, he suggested that the rationale for his removal from office was due to aspects of the way he conducted the investigation.

The former FBI chief was said to have written notes describing his private meetings with Donald Trump. According to the memos, obtained by Congress, the US president had asked Comey to drop the bureau’s investigation into Mike Flynn, Trump’s former national security advisor who was fired for misleading Vice President Mike Pence and the FBI about the nature of contacts he had with a Russian official.

Following Comey’s firing, the FBI had reportedly briefly launched an obstruction of justice probe into Donald Trump because he was seen as a possible national security concern for the dismissal.

Mueller found no evidence of collusion between the Trump campaign and Russia, but described several incidents where Trump attempted to have obstructed the investigation. The special counsel failed to exonerate Trump on obstruction of justice but stopped short of indicting the president.