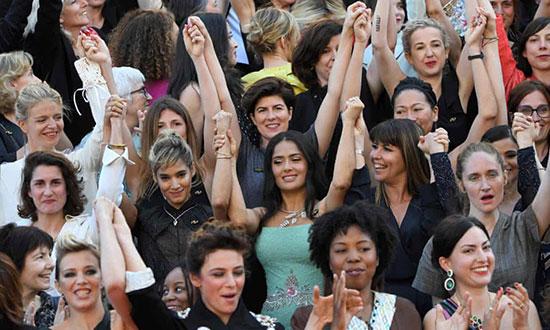 A protest on the red carpet last year against the lack of female directors. As in 2018, this year just three women are up for the top prizes at Cannes. Photograph: Loic Venance/AFP/Getty Images

This year, the Cannes film festival is rolling out an initiative called Le Ballon Rouge – named after a children’s film by Albert Lamorisse – which offers a package of services aimed at making the festival more attractive to families.

There is a breast-feeding and baby-changing area; a dedicated kids’ pavilion; an accreditation process providing two free additional badges for a nanny and baby; priority and easy access for parents with young children and prams; plus something called Le Ballon Rouge baby VIP kit, which includes a list of certified nannies for after-hours care.

The innovations are part of the festival’s modernisation process, in response to the Harvey Weinstein scandal and the #MeToo movement. But are the changes worthwhile initiatives or unworkable gimmickry?

The film critic Leslie Felperin welcomes the measures, but questions how practical they are. “It’s a nice gesture, but I don’t know any working mother who would ever dream of bringing her children to Cannes,” she says. “The idea of trying to get a pram down the Croisette is horrible – you can’t even get from one end to the other as a pedestrian.”

Despite the initiatives and VIP kits, the festival has appeared unwilling to address some more glaring issues. Cannes has been criticised for giving an honorary Palme d’Or to the French actor Alain Delon, despite concerns raised by groups over his statements opposing adoption by same-sex couples (he said it was “against nature”) and his admission of slapping women. The festival told Variety it was honouring Delon because “he is a legendary actor and part of Cannes history”.

The decision comes 12 months after Lars von Trier was welcomed back to the festival despite allegations by the singer Björk that he sexually harassed her on the set of his 2000 film Dancer in the Dark.

This year, there is another dearth of female directors in the running for the top prizes, with only three – Jessica Hausner, Céline Sciamma and Justine Triet – in contention. There were only three women out of 21 directors in competition last year (Nadine Labaki, Eva Husson and Alice Rohrwacher) and another trio in 2017 (Sofia Coppola, Lynne Ramsay and Naomi Kawase).

In many respects it looks very much like a case of business as usual on the riviera.

It comes after last year’s closing awards sent shockwaves through the industry. The Japanese director Hirokazu Kore-eda turned heads when he won the Palme d’Or for Shoplifters, his film about thieves hustling on the fringes of society. The film was lauded for its “extraordinary surprise ending”, and at the awards ceremony there was another unexpected moment that turned up the heat at the usually sedate proceedings.

“In 1997, I was raped by Harvey Weinstein here at Cannes. I was 21 years old. This festival was his hunting ground,” said the Italian actor and director Asia Argento, who alleged she was attacked by the film producer at the Hotel du Cap-Eden-Roc.

Argento then turned to the smartly dressed members of the audience who represent cinema’s elite, those she believed were complicit in allowing the film producer and others to carry out their alleged attacks.

“He will live in disgrace, shunned by a film community that once embraced him and covered up for his crimes,” she said. “You know who you are. But more importantly, we know who you are. And we’re not going to allow you to get away with it any longer.”

Earlier at the festival, 82 women had staged a protest on the red carpet. The number was significant: 82 movies by female directors have been in contention for prizes in its 71 years, compared with more than 1,600 films by male directors. Jane Campion remains the only female director to have won the Palme d’Or, for her 1993 film The Piano. Kristen Stewart took off her Louboutin heels on the red carpet in order to protest against the strict dress code that is seen by many as an outmoded way to police the appearance of the festival’s female guests. Sixteen actors staged a further red carpet protest to highlight racism in the film industry.

The festival did attempt to address the calls for it to be more proactive in giving assistance to those who have been sexually harassed or assaulted – it opened a hotline that was meant to provide victims or witnesses with a way to report aggressors.

All this during a year that was supposed to be a turning point – the moment Cannes, the grandest film festival of them all, came to terms with the #MeToo movement and modernised. Twelve months on from Argento’s rebuke, Jim Jarmusch’s zombie film The Dead Don’t Die will open this year’s festival, and the event is still dealing with its own persistent nemesis: the spectre of historical sexual assaults and its apparent inability to take gender disparity seriously.

“It’s still stuck in a Mad Men culture from the 1950s,” says Felperin. “It’s designed around the needs of mostly male executives who are still grappling with the fact the ground is moving under their feet.

“There’s just something very problematic about the model of film festivals. Something is broken.” So will 2019 be Cannes’ year of reform? The world will be watching the Croisette with interest.