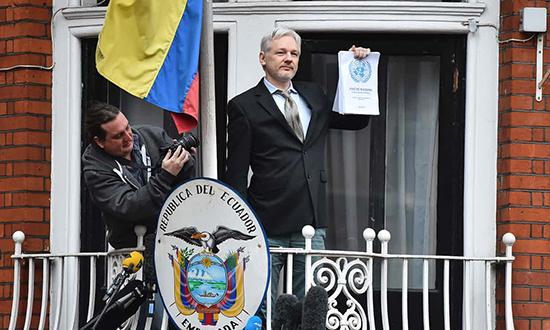 MADRID (Sputnik) – The Ecuadorian government will pass to Washington documents of WikiLeaks founder Assange that are currently kept in the Ecuadorian Embassy in London, where Assange was residing from 2012 and until his arrest in April, according to El Pais newspaper.

Ecuador will also provide Washington with Assange’s mobile phones, computers, memory cards and other data storage devices following a search in the room where he used to reside, Spanish media reported on Sunday, citing an official notice for Assange’s lawyer.

The search is expected to take place on 20 May.

It was the Office of Attorney General of Ecuador that briefed Assange’s Ecuadorian lawyer Carlos Poveda on the decision to pass to the US Assange’s belongings.

This comes after Assange was arrested in the UK capital on 11 April, after Ecuador revoked his asylum status. He was then sentenced to 50 weeks in jail for jumping his bail back in 2012, when he took refuge inside the Ecuadorian Embassy in London to avoid extradition to Sweden over a sexual assault investigation that has since been dropped. The United States is seeking Assange’s extradition on charges of conspiracy to commit computer intrusion.

The United States has to provide London with all necessary documents for Assange’s extradition until 12 June.

Assange’s lawyers and supporters fear that he could be charged under the Espionage Act in the United States and face death penalty.

IAEA Says Iran Has Nothing to Gain from Halting Nuclear Inspections