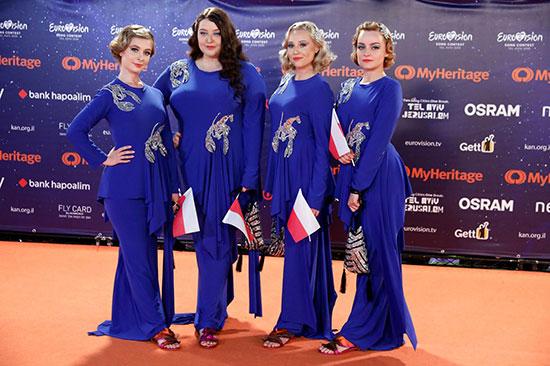 TEL AVIV (Reuters) – Contestants from 41 countries walked an orange carpet in Tel Aviv’s “Culture Square” on Sunday for the opening ceremony of Eurovision 2019, brushing aside security concerns and calls for a pro-Palestinian boycott.

The 64th Eurovision Song Contest holds semi-finals in Tel Aviv, Israel’s entertainment and business capital, on Tuesday and Thursday ahead of the grand final on Saturday.

Instead of the traditional red carpet, an orange carpet, matching the logo of a company sponsoring the international song fest, was rolled out at the Tel Aviv square that houses Israel’s Habima national theater and the Israel Philharmonic.

“Everyone is excited in my team. I’m really happy to be here,” said Cypriot singer Tamta, the first artist to stroll the walkway flanked by visiting photographers and reporters.

The four members of Poland’s Tulia gave a quick sample of their folk singing style called “śpiewokrzyk” or “scream singing” to the crowd’s enjoyment.

Finish DJ Darude said artists behind the scenes of the festival were “slapping high-fives and having a good time.”

Concerns had been raised that the contest could be disrupted by a surge in cross-border violence between Israel and Palestinian militants in Gaza. But a ceasefire that went into effect a week ago has been holding.

When Israel was selected last year to host the 2019 Eurovision finals, the internationally televised event was identified by the Boycott, Divestment, Sanctions (BDS) campaign as a target for its campaign to pressure governments, companies, performers and academics to isolate Israel.

BDS has called on artists and broadcasters to withdraw, saying that holding it in Tel Aviv amounted to “artwashing – whitewashing through arts” Israel’s policies towards Palestinians in the occupied West Bank and Gaza.

No delegations have pulled out.

Israel has mounted a counter-campaign, rebutting BDS attacks and accusing some supporters of being anti-Semitic or having ties to militant groups such as Hamas and the Popular Front for the Liberation of Palestine, allegations BDS leaders reject.

An Israeli ad for Eurovision that used a misogynistic term and an anti-Semitic trope to send up stereotypes about Israel has raised hackles among some viewers.

The 4-1/2 minute song video, posted online by Israel’s public broadcaster Kan on Friday, underscored worries about low attendance at the competition given security concerns and calls for a boycott.

Two singers are shown greeting a wide-eyed couple arriving at Tel Aviv’s airport with: “I know just what you heard – that it’s a land of occupation. But we have so much more than that!”

In an apparent spoof of the common local mispronunciation of “beaches”, a male singer urges: “Come and enjoy our lovely bitches.” On Israel’s often unwieldy demographics, he adds, beaming: “Most of us are Jews but only some of us are greedy.”

Some Israelis were left fuming or confused.

Shahaf Weisbein, an Israeli activist with the left-wing Women for Peace group, denounced the video as a “disgrace” that “whitewash(es) the apartheid reality” of Palestinians.

“It also includes an ugly anti-Semitic trope of Jewish ‘greed’,” she said in a statement.