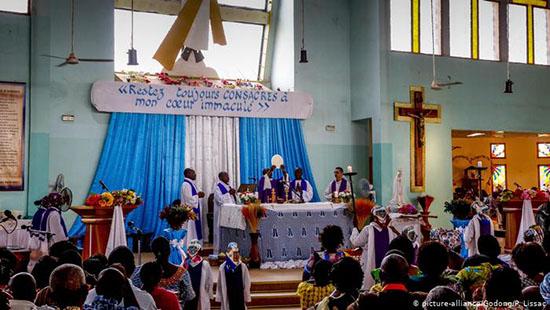 A group of attackers has killed several worshippers in Burkina Faso during a Catholic Church service. It is the second attack on Christians in the West African nation in two weeks.

Gunmen killed at least six Christians in a Catholic Church in the Burkinabe town of Dablo on Sunday. The worshippers were attending morning mass when at least 20 men surrounded them and shot six dead, according to a government statement.

“These terrorist groups are now attacking religion with the macabre aim of dividing us,” the statement said.

“Towards 9 a.m. during mass, armed individuals burst into the Catholic Church,” the mayor of Dablo, Ousmane Zongo said. “They started firing as the congregation tried to flee.”

The attackers then torched the church, and set fire to a shop and two vehicles, in the second attack on Christians in as many weeks in a nation increasingly overrun by jihadis.

At the end of April, five Christians were killed in an attack on a Burkinabe Protestant Church. The pastor was among those killed in the raid in the small town of Silgadji.

Both Dablo and Silgadji are both in the north of Burkina Faso, which has suffered from increasingly frequent and deadly attacks attributed to a number of jihadi groups, including the Ansarul Islam group, the Group to Support Islam and Muslims (GSIM) and Islamic State in the Greater Sahara.

Germany will give an additional €20 million to Burkina Faso and over €35 million to Niger ($22.4 million and $39 million, respectively) to support development projects as well as the outfitting and training of police officers in each country, she said.

“We talked about the deteriorating security situation and we want to be on the side of Burkina Faso, especially in terms of cooperation on security,” Merkel told reporters after a meeting with Kabore.

“This is necessary because in the east and north of the country there is a situation where children cannot go to school, where populations seem to live in insecurity. We need to end these problems as quickly as possible.”

Over one half of Burkina Faso residents are Muslim, but Christians, most of them Catholics, make up some 30% of the population. The West African state has beenstruggling with jihadi violencesince 2015.