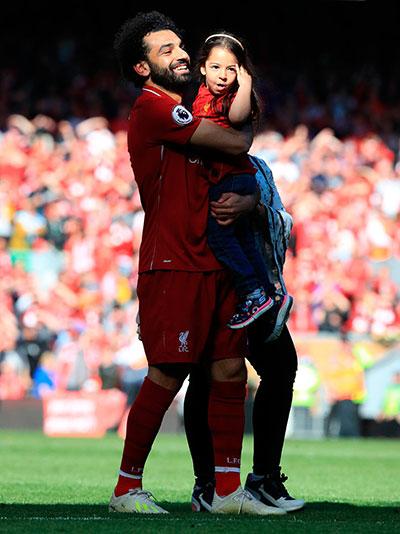 They sing. It’s all they can do, really. As the curtain comes up on the final weekend of the Premier League season, just like every other weekend, Anfield bursts into song. An old song about holding your head up high when you walk through the storm. About walking on with hope in your heart. These are the dreamcatchers, and after nine months and 37 games, hope is all they have left.

From the moment they arrive at training on a Monday to the moment they leave the stadium on a Sunday, every detail is scrutinised to the most minuscule degree, precisely so nothing is left to chance. And so, after nine months and 37 games, where has it all got them? Relying on Alireza Jahanbakhsh and Glenn Murray to help them win a first league title in 29 years. This is, for those of you new to this, an extremely weird sport.

It’s out of their hands now. They know that. All they can do is beat Wolves and hope. “It’s the most important game,” writes Jurgen Klopp in his programme notes. “Not because of what might happen, but because it is next. It is the only game we can affect, and the only points we can win.”

Wolves haven’t come here for a kickabout. They’ve come to dance. They’re playing a five-man defence to counter the threat of Liverpool’s full-backs. Raul Jimenez sprints fully 60 yards up the pitch to put some pointless pressure on Alisson’s goal-kick. Liverpool, meanwhile, are playing plenty of precise passes that lack urgency, and a lot of urgent passes that lack precision.

But with 16 minutes on the clock, Sadio Mane finally manages to combine the two. He sprays the ball out to Trent Alexander-Arnold on the right, who crosses the ball for Mane to finish. It’s the 88th goal of Liverpool’s league season, and yet it’s roared as if it were the first. Manchester City are still goalless with Brighton, and so at 3.17pm in the glorious May sunshine, Liverpool are champions-elect.

Shortly afterwards, an enormous noise emanates from the Main Stand. It spreads like fire around the stadium, and within seconds Anfield is in convulsions of rapture. As fans and journalists reach frantically for their phones, it turns out they’re cheering nothing. It was all a malignant rumour. There’s a suggestion that a few mischievous Wolves fans were responsible. This is how wars start.

0But then, a few minutes after that, the cheers go up again, and this time they’re real. Remarkably, it’s Murray – a player who if he turned up at Melwood would probably be handed a yellow bib and put to work in the car park – who has put Brighton 1-0 up at the Amex. Grown men are embracing each other in the stands. The Liverpool bench spin around in bewilderment. For a few seconds at Anfield, the match unfolding before them could scarcely be of less importance.

Exactly 83 seconds, to be precise. That’s the time it takes Sergio Aguero to equalise for City. And then, 20 minutes after Liverpool first went top of the virtual Premier League table, it’s time to hand back their virtual medals and shelve the virtual open top bus tour. City are 2-1 up.

The moment when Liverpool definitively realise that their 29 years without a league title are going to become 30 comes just after the hour mark. Very little has happened on the pitch in the meantime: Matt Doherty has hit the bar for Wolves, Joel Matip has made some crucial clearances, Liverpool have made a decent fist of pretending they’re still playing a meaningful football match. But slowly at first, and then all at once, news of City’s third goal begins to trickle through. It’s all over. The game is up.

And so with nothing left to be done, they sing. “We shall not be moved,” they sing. “Liverpool, Liverpool, Liverpool,” they sing. They sing to forget about Brighton and City and Vincent Kompany’s boot and Mane’s goal that wasn’t, and the difference between 97 points and 98. They sing to drown out the Wolves fan gleefully taunting them with chants of “You f—ed it up again.” They sing to numb the pain. Because for all the points and the plaudits, the last-minute winners and the unforgettable moments, for all the records they’ve broken, and the pulses they’ve set racing, they’ve lost. And it hurts.

If you are second, you are nothing. Not my words, not the words of the Pep-loving media, but the words of Bill Shankly. Liverpool was never supposed to be a club of glorious failure and beautiful pain. Thirty wins isn’t nothing. The highest ever points tally for a runner-up in the history of Europe’s major leagues isn’t nothing. But for a generation brought up on Liverpool as a relentless, insatiable winning machine, it’ll never be enough. Glorious, spectacular failure. But failure, all the same.

Klopp’s Liverpool have helped to make this one of the most jaw-dropping title races in recent memory. They’ve played football from another planet. They’ve exorcised a decade of demons, the accumulated angst of an era of underachievement. They’ve laid to rest the ghosts of Kromkamp and Hodgson, of the 6-1 at Stoke at the 3-3 at Palace, of Gerrard’s slip and Benitez’s facts. They’re entitled to wonder, given that they’ve pulled one of the most stupendous league campaigns in history and still fallen short, what more can be done.

And so this is how it ends. With polite handshakes and a smattering of applause and a few puffs of red smoke in the Kop end. With a lap of honour and kids on the pitch and the warm glow of another season gone. And naturally, a song. Allez, allez, allez, lads. You’ll never walk alone. And then they’ll file out of Anfield and into the pubs and bars, and they’ll sing some more. See you next season, Liverpool. It’s been a blast.