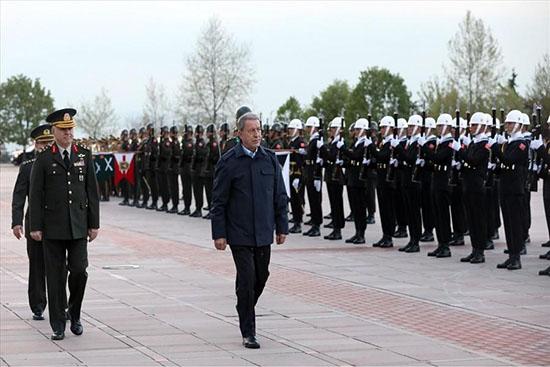 The Syrian regime should end attacks in southern Idlib and its forces must return to borders determined by Astana Agreement, Turkey’s defense minister said on May 10.

“We expect the Russian Federation to take effective and decisive measures to prevent these violations and attacks in the following period,” Hulusi Akar said at a meeting in southern Hatay province.

“Assad regime attempts to widen its control area in south of Idlib against the AstanaAgreement.” He said attacks cause civilian casualties and force residents to leave their living spaces. “Humanitarian problems are growing day by day and increasingly tending to turn into a disaster.”

The attacks also pose a risk to Turkey’s observation spots in the region, he said, and disrupt Turkish armed forces’ patrols and movement.

“This leads to disruption of Turkey‘s activities, showing every effort to fulfill their obligations under the bilateral agreement on Astana,” Akar said.

“Turkey, aware of its responsibilities, will make every effort in line withexisting agreements with Russia for the security and peace of innocent people in the region.”

Syria has begun to emerge from a devastating conflict that began in 2011 when the Assad regime cracked down on demonstrators with unexpected severity.

Turkey and Russia agreed last September to turn Syria’s northern Idlib province into a de-escalation zone where acts of aggression would be expressly prohibited.