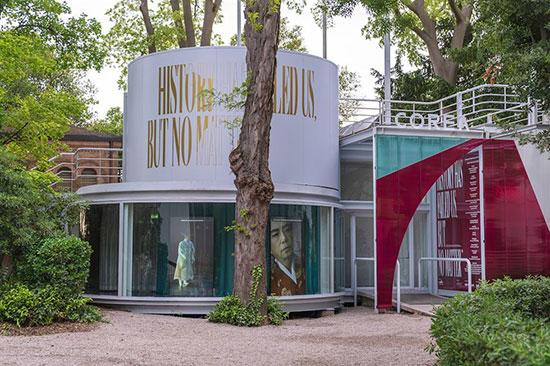 The Korea Times -By Kwon Mee-yoo

This year’s Venice Biennale is helmed by American curator Ralph Rugoff, and Rugoff presenting the theme “May You Live in Interesting Times.”

Rugoff only invited living artists to the main exhibition, held at Arsenale and Giardini, to best reflect how artists of today are reacting to and experimenting in the fast-paced, complex times. Overall, 42 out of 79 artists taking part in the main exhibition are women. This is the first time in the event’s 142 year history that more than half of the participating artists are women.

This year, all Koreans at the Venice Biennale are women. The Korean Pavilion is curated by Kim Hyun-jin and three participating artists Jung Eun-young, also known as siren eun young jung, Jane Jin Kaisen and Nam Hwa-yeon. At the main exhibition, the works of three Korean women artists Lee Bul, Suki Seokyeong Kang and Anicka Yi are on view.

Kim Sun-jung, president of the Gwangju Biennale Foundation, was part of the five-member jury who picked the winners of the Golden Lion at this year’s Venice Biennale, adding another Korean woman’s power to the contemporary art’s biggest event.

Under the title “History Has Failed Us, But No Matter,” the four women created a fissure in Western-oriented, male-dominated modern history.

Curator Kim said the exhibit will highlight women who fought against history and emphasize gender diversity as a driving force to reread and write history. The Korean theme is related to the main theme as the artists inquire into the marginalized lives of women in East Asia, who have often been neglected in history.

Jung, winner of the Korea Artist Prize 2018, presents a video “A Performing by Flash, Afterimage, Velocity, and Noise.” The artist, who has been researching “yeoseong gukgeuk” (female-only theater) for over a decade, sheds light on the performers of marginalized genres such as transgender musicians, lesbian actresses and drag kings.

“Community of Parting,” a two-channel video by Kaisen, born on Jeju Island and adopted by Danish parents, is a reinterpretation of the Korean folktale “Princess Bari.” Often told as a tale of filial duty, Kaisen saw it as a border of life and death and juxtaposed with female diaspora in the process of modernization.

Nam’s “Dancer from the Peninsula” revolves around legendary Korean dancer Choi Seung-hee (1911-1969), who lived a controversial life of being pro-Japanese during the Japanese colonial era and later defecting to North Korea.

The Korean Pavilion was included in the top pick of the pavilions by British auction house Christie’s and included in the “10 International Pavilions To Visit” by Hong Kong Tatler.

Lee Bul unveiled a large-scale sculpture “Aubade V” at the Arsenale. The four-meter-tall monument-like sculpture is made with materials from demolition of guard posts in the Demilitarized Zone (DMZ) between North and South Korea. Complete with LED screens that references Morse Code and the International Code of Signals, Lee questions the vanity of ideology and monument.

Two other works by Lee, including “Scale of Tongue” are on display at the Italian Pavilion.

Kang’s “Land Sand Strand” and “Grandmother Towers” were handpicked by Rugoff for the exhibit. Composed of sculptural objects those are activated with performances, Kang’s works are based on “hwamunseok,” or Korean traditional sedge mat.

“Land Sand Strand” is a metaphor to numerous individuals like grains of sand, strolling through sculptures to view the scenery around them and meditate on their contemporary life. The activation manual is inspired by “chunaengmu,” a type of Korean traditional dance named after spring nightingale. “The drawings in the manual correspond to the movements during the activation,” Kang said.

At Giardini, Kang presents “Grandmother Towers,” which began as an abstract portrait of the artist’s grandmother, who survived harsh times in Korea’s modern history. “This symbolizes a woman who is standing firm on her feet, not falling down. They might look fragile, but they can stand on their own,” the artist said.

Korean-American Yi presented an installation “Biologizing the Machine (tentacular trouble).” Known for relating biological materials in her artwork, Yi’s yellow lanterns on view at the Arsenale filled with animatronic moths and dropping water are reminders of the origin of life.

In addition to the national pavilion and main exhibition, Korean contemporary art is also presented at collateral events.

Presented as a collaboration between the National Museum of Modern and Contemporary Art, Korea (MMCA) and the Civic Museums of Venice, the exhibit features over 60 works of the late artist whose “dark and poignant paintings that magnificently capture the shattered national psyche of the time.”