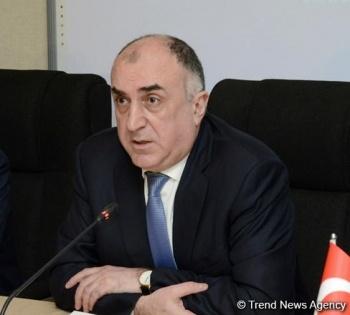 Azerbaijani Foreign Minister Elmar Mammadyarov expressed hope that the democratic development of Armenia willmove it towards substantial talks with Azerbaijan, which means that Azerbaijanis, who were subject to brutal ethnic cleansing, would manage to return back to the places of their origin.

Mammadyarov made the remarks at the Eastern Partnership (EaP) Foreign Ministers’ meeting in Brussels on May 13.

“Azerbaijan has proved itself as a reliable partner in the region, just as it did so in its relations with the EU,” the minister said.

“Unfortunately, the EU’s and Azerbaijan’s neighbourhoods have things to get improved. Some regional perspectives such as regional connectivity, trade projects, and few other initiatives remain a hostage to unresolved conflicts. The ongoing occupation by Armenia of the territory of Azerbaijan prevents us from taking the whole region to another level of cooperation.”

“We need to unlock a whole potential of the region,” Mammadyarov added. “If we are to move together with EaP, so as to help the EU realize its neighbourhood policy objectives, the issues of resolution of conflicts and de-occupation must be addressed. As the European Parliament resolution of October 2013 on the European Neighbourhood Policy condemned that, EU’s one partner country cannot occupy the territories of its another partner country. So, this is not only the UNSC, the UN Charter or OSCE documents – this is EU’s legislative body calling things with its own names. We believe that the future and success of EaP depends on maintaining security and stability in the region.”

“Therefore, full support and compliance by all EaP stakeholders, including the EU and its member states, to the principles of territorial integrity and inviolability of internationally recognized borders should be preserved and streamlined in all documents on all levels and in all frameworks,” he said.