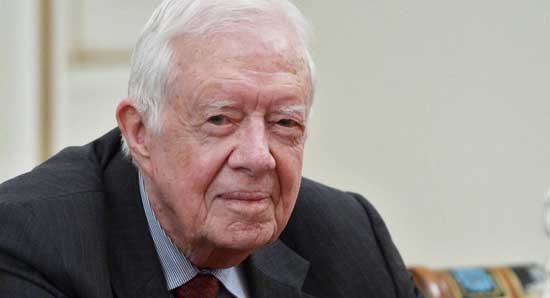 Jimmy Carter has been in remission from cancer since undergoing surgery in 2015 to remove a small mass on his liver.

Former US President Jimmy Carter broke his hip in a fall on Monday while leaving his house to go turkey hunting, but was recovering after surgery, the Carter Center said.

“He is recovering comfortably from surgery to repair a broken hip,” the organization said in a statement. “His surgeons stated that the surgery was successful.”

Carter, who served from 1977 to 1981 as the 39th US president, has been in remission from cancer since undergoing surgery in 2015 to remove a small mass on his liver.

In 2017, the 94-year-old former president was treated for dehydration while building houses in Winnipeg, Canada, for Habitat for Humanity.

He has continued to build houses with Habitat in years since, but conceded that this year’s hunting season was over for him.

“President Carter said his main concern is that turkey season ends this week, and he has not reached his limit,” the statement said. “He hopes the State of Georgia will allow him to rollover the unused limit to next year.”