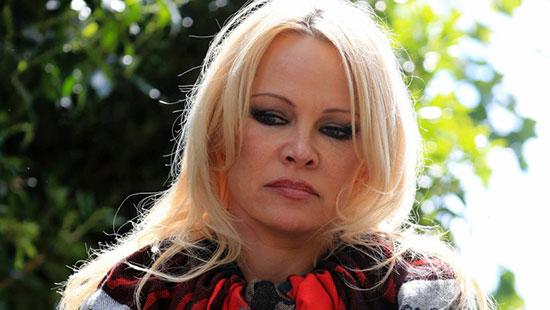 Canadian actress Pamela Anderson, a friend of Julian Assange, recently visited the WikiLeaks founder in prison in Britain. In an interview, she reports on his condition and his fight against extradition to the United States, where he could face additional charges.

How is Julian Assange doing? And comes next for him? For close to a decade, the WikiLeaks founder has been in the headlines around the world. Assange has feared his possible extradition to the United States ever since WikiLeaks published documents about the wars in Afghanistan and Iraq in 2010.

The Swedish Public Prosecutor’s Office also opened an investigation into Assange in 2010 for what it described as “minor rape.” But Assange claimed he had engaged in consensual sex and that the proceedings were politically motivated. The Swedish authorities closed the investigation in 2017 because they saw no way of moving it forward.

Assange initially surrendered to the police in Britain at the end of 2010 but was subsequently released, subject to conditions, whereupon he applied for asylum in June 2012 at the Embassy of Ecuador in London. He lived holed up inside the embassy until April 11 of this year, when the Ecuadorean government lifted Assange’s diplomatic asylum on the grounds that he had violated the conditions placed on his residency in the embassy.

The British police immediately arrested him on charges of evading justice in an action WikiLeaks described as having been “politically motivated.” Later, police announced the 47-year-old had also been arrested on behalf of the U.S. authorities in a development underlining the complexity of the case. Some observers believe the pretexts given are false. Assange has a number of prominent supporters, including the actress Pamela Anderson.

The U.S. Justice Department has accused Assange of committing conspiracy together with whistleblower Chelsea Manning (formerly Bradley Manning). Assange is accused of having helped Manning crack a password for a U.S. government computer network. It’s also possible that if successfully extradited to the U.S., the charges against Assange could be expanded to include espionage, which could come with the death penalty. Assange is currently fighting the extradition order.

In early May, a British court sentenced Assange to 50 weeks in prison for violating the conditions of his bail. And on Monday, a public prosecutor in Sweden said the investigation into the rape allegation would be reopened.

Assange is currently being detained in a British maximum-security prison, where Anderson visited him several days ago. The Canadian actress is one of the 47-year-old Australian’s best-known supporters.

SPIEGEL ONLINE: Ms. Anderson, you visited Julian Assange at Belmarsh High Security prison in London several days ago. What was the purpose of your visit?

Anderson: I visited him because he’s my friend. I wanted to support him, I wanted to give him a hug. And I think he and WikiLeaks have given the world important information, on U.S. war crimes and other wrongdoings by powerful people. It’s just not right to put him in a high security prison for publishing truthful documents.

SPIEGEL ONLINE: How was the visit?

Anderson: It was horrible. I went with Kristinn Hrafnsson, the editor-in-chief of WikiLeaks. We had to leave our fingerprints and take off our shoes and socks. Eventually, we sat in a little interrogation room with cameras all over. Total surveillance.

SPIEGEL ONLINE: What was your impression of Assange?

Anderson: When he finally appeared, it struck me that he is much thinner than he was when I saw him the last time inside the Ecuadorian Embassy about a year ago. He lost about 10 kilograms.

SPIEGEL ONLINE: How are the conditions under which he is being held?

Anderson: He is confined to a little cell for at least 23 hours a day. He can’t send letters because he has no addresses with him. He can’t get books from the prison library, he’s not getting access to legal documents to prepare himself for his extradition trial. He has no access to news except the BBC and Channel 4, although the guards took the TV set away again.

SPIEGEL ONLINE: How and when did you get in contact with Assange?

Anderson: I met him through Vivienne Westwood. Vivienne said I should meet him. I wanted to know how I could become a better political activist, a more effective activist. How can I help people to become career activists?

SPIEGEL ONLINE: You visited him at the Ecuadorian Embassy around 20 times. What were your experiences with him like?

Anderson: I think he is extremely intelligent. He is funny. He is a great guy. I was really intimidated when I met him for the first time. His image was larger than life. People loved or hated him. He obviously sparks reaction.

Anderson: Yes. He was interested in the work I am doing for animal rights and different environmental causes. And I love people who really risk their lives, who put their lives on the front line to reach change. The world needs more people like Julian Assange.

SPIEGEL ONLINE: You are supporting him in his fight against extradition because you admire his courage?

Anderson: Not just that. Julian’s case is about freedom of speech, the right to know. There are a lot of skeletons in America’s closet. I am a Canadian living in America, and I see so many people just brainwashed, though there is so much to be done, against climate change, against the destruction of the environment.

SPIEGEL: Following your career as an actress and model, you began working on environmental issues — on behalf of organizations like PETA and Sea Shepherd, for example, which is fighting against the slaughter of whales. Isn’t that something quite different from what Assange is doing and his struggle in the digital world.

Anderson: Yes, but Paul Watson, who is one of the founders of Greenpeace and later Sea Shepherd, is very much like Julian Assange. Their fighting spirit is just the same.

SPIEGEL ONLINE: Do you plan to continue supporting Assange?

Anderson: There is this terrible smear campaign against Julian going on. I was just in Texas and the way they talk in the news about him, people basically think: We’re gonna bring him home with his head on a stick.

SPIEGEL ONLINE: Are you criticized by people for supporting Assange?

Anderson: Yes, I am — especially in Hollywood. People are coming up and saying to me: “How can you dare to support this person?” I often ask them back: Why are you getting so angry? And they don’t know.

SPIEGEL ONLINE: But you will continue to support Julian Assange and WikiLeaks?

Anderson: I will. Because there will be no justice without public support. We have to be very strong and outspoken. When I met Julian in prison he said: “Save my life.”