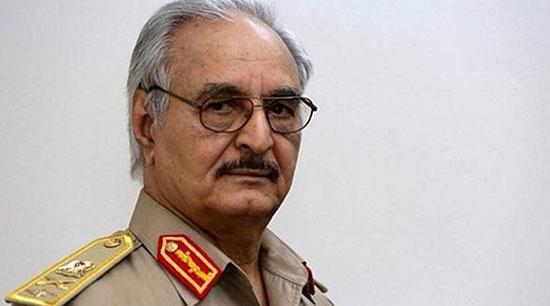 Khalifa Haftar, a former army chief and the current head of the self-styled Libyan National Army, has launched a grab for power.

The violent overthrow of Muammar Gaddafi had plunged an oil-rich Libya into civil war. The so-called ‘Arab Spring’ that began in Tunisia in 2011 and swept through several Arab countries, created the conditions for the NATO military intervention in Libya, under the garb of humanitarian intervention. As Libyans revolted, NATO bombarded Libya to effect regime change. Gaddafi was overthrown, publicly humiliated by Libyan mobs, and finally — executed.

Since then, Libya has been a patchwork of territories controlled by regional militias, locked in a simmering civil war. UN-sponsored democratic elections were held after Gaddafi’s removal.

A semblance of normalcy was creeping back under the UN-backed Government of National Accord (GNA) based in Tripoli, though another rival government, formed by the House of Representatives, is based in the eastern city of Tobruk.

Field Marshal Khalifa Haftar, a former army chief and the current head of the self-styled Libyan National Army (LNA) in East Libya, has launched a grab for power, by attacking Tripoli in April 2019. Casualties are rising in the 5-week-old conflict, with nearly 432 people dead, at least 2,500 injured, and over 50,000 displaced. The UN has called for ceasefire to address humanitarian needs. The UN Secretary-General (UNSG) has met Haftar, but his comments indicate that Haftar has clearly ignored the UNSG’s pleas for a ceasefire, and negotiated settlement.

Fayez al-Sarraj, PM of GNA, has vowed to defend Tripoli, and has accused Haftar of launching a coup and betraying various agreements. Al-Serraj has refused to negotiate with Haftar, unless he withdraws his forces and stops the assault on Tripoli.

Haftar is an old comrade of Gaddafi, and had helped overthrow the King Idris regime in 1969, propelling Gaddafi into power. In 1973, Haftar joined the Egyptians in the Yom Kippur war against Israel. In 1987, he led the Libyan Army on the disastrous invasion of Chad. Haftar was captured and abandoned by Gaddafi. The CIA took advantage of his humiliation, and Haftar and his military companions were airlifted to the USA, where he lived for 20 years and obtained American citizenship.

India-Libya ties were cordial under Gaddafi — not anymore

Haftar is an American proxy who has been unleashed by the CIA to take over Libya. He returned to Libya in 2011 after Gaddafi was overthrown. Haftar made a name by defeating Islamist forces in eastern Libya, around the city of Benghazi. He has managed to seize several oilfields and oil installations, including the largest one at Sharara.

Haftar is also backed by Egypt, Saudi Arabia and UAE, with funds and military equipment, including aircraft. The Europeans are attempting to close ranks against Haftar, though there is tension among major European countries about residual French and Italian support for Haftar.

The renewal of fighting near Tripoli has compelled the Indian government to advise all Indian nationals to leave the country immediately. India has also withdrawn its peacekeepers from Libya, who were stationed there under the UN flag. India-Libya relations were cordial during Gaddafi’s tenure in office. India welcomed the lifting of UN sanctions on Libya, and after the fall of Gaddafi, India established ties with the successor — that is, GNA — and relations were consolidated with the regular exchange of high-level visits.

India has given priority to humanitarian assistance to help those wounded in the war, particularly with the supply of medicines, artificial limbs and prosthetics and training. Wounded Libyans have been brought to India for medical treatment. India has also provided assistance for capacity building in areas like agriculture, science and technology, IT etc.

A proxy war for control over Libya’s oil

Currently, the struggle is between the GNA — backed by Sunni Islamist forces holding Tripoli — and Haftar’s forces. Strangely, even the Russians are backing Haftar. It is alleged that Russia has deployed around 300 mercenaries to help him. Both USA and Russia have prevented a formal reference to the UNSC for a ceasefire. The GNA is getting support from Turkey and Qatar.

The conflict in Libya has basically become a proxy war for control over Libya, and its oil resources.

President Trump has spoken to Haftar, and has praised his role in fighting terrorism and securing Libya’s oil resources. Libya’s future is bleak. Even if Haftar succeeds in capturing Tripoli and establishes an authoritarian regime, it is unlikely to stabilise the country. The struggle for power and influence in Libya will not end soon.

This article originally appeared on The Quint.