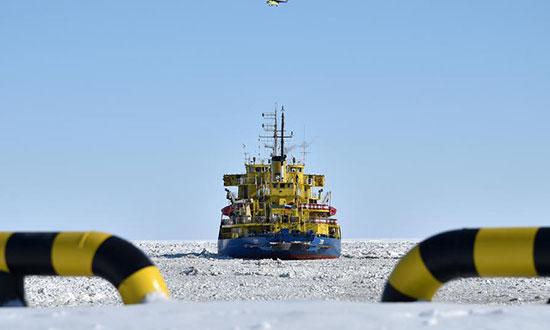 By the standards of the Arctic Council, it was a frosty talk.

The Arctic has become “an arena of global power and competition,” said US Secretary of State Mike Pompeo during last week’s meeting of the body, comprising eight Arctic countries and representatives of the indigenous people of the region, in Roveaniemi, Finland.

Particularly worrying, Pompeo said, was Russia’s “aggressive behavior” – referring to its increasing military presence in the Arctic and recent demands that foreign vessels should ask Moscow’s permission before transiting through the Northern Sea Route.

With the Arctic Council customarily focused on environmental and development issues, Pompeo’s comments on geopolitics and security were highly unusual. The meeting ended without a multilateral ministerial joint statement.

Clearly, the geopolitical importance of the Arctic is rising. As the ice shelf shrinks due to global warming, the region is increasingly accessible to exploitation, while previously inaccessible commercial routes connecting Europe with Asia are now becoming viable.

These routes could carry a significant portion of global trade in the future, and when it comes to asserting control, recent Russian ship seizures in the Sea of Avoz provide a worrying precedent, one expert said.

The Northern Sea Route (NSR) – sometimes called the “Northeast Passage,” analogous to Canada’s “Northwest Passage” – runs along Russia’s vast northern coastline from the Kara Sea all the way to the Bering Strait.

It is the shortest route linking European markets with the Asia-Pacific. According to estimates, European cargoes taking the NSR can reach Asian ports 40% faster than by passing through the Suez Canal – potentially offering huge savings in both fuel costs and time for shippers.

In the past, this was not viable. The route, which lies within Russia’s Exclusive Economic Zone, was covered by a thick ice shell for most of the year and some parts were ice-free for only two months, making transit dangerous and expensive.

However, in the last decade, global warming has shrunk the ice shelf by 13%, and in August 2017, the first ship made the passage without icebreakers.

This change opens up the route, and also unlocks vast untapped resources. An estimated 13% of the world’s undiscovered oil reserves and 30% of natural gas are locked in the Arctic’s frozen soil, which is also rich in gold, uranium and diamonds.

Russia’s interest in the Arctic dates back to Tsar Peter the Great (1682-1725), who first mapped the country’s 24,000 kilometer-long Arctic coastline. Under Stalin’s rule, industrial facilities and settlements were built mainly using prison labor on a mass scale.

Since the 1930s, Soviet vessels have been transiting the NSR, providing fuel and goods to settlements on the northern coastline of the world’s biggest country. Russia built the world’s first nuclear icebreaker, Lenin, in 195. Its nuclear icebreaker Arktika was the first ship to reach the North Pole in 1977.

After the Soviet Union collapsed, however, investments in the region dried up and Arctic settlements started to decay. The NSR was virtually abandoned. In 1987, annual cargo volume peaked at 6.58 million tonnes and by 1998, that had dropped to a meager 1.46 million tonnes.

The re-emergence of Russian geopolitical ambitions under President Vladimir Putin has resurrected interest in the Arctic. In a 2007 publicity stunt worthy of Putin, Russian explorers placed a titanium Russian flag on the floor of the Arctic Ocean – triggering complaints from other Arctic countries.

In the last decade, foreign shipping companies have been exploiting the NRS with the Russian government charging lucrative fees for logistic support. Most vessels passing along the route require Russian icebreakers to escort them at least part of the way. In 2018, business boomed – 20 million tonnes of cargo passed through the NSR, twice as much as the year before. Moscow expects that amount to quadruple by 2025.

Moscow’s ultimate goal is spectacularly ambitious: year-round navigation. That would make the NRS competitive with the Suez Canal.

Russia plans to reach this goal by beefing up its fleet of nuclear icebreakers – the only such fleet on earth – produced by state nuclear giant Rosatom. The company is now building eight new models that should become operational within 2030.

Putin has claimed that about one-tenth of all Russian investments are allocated to the Arctic region, but given the scale of Moscow’s ambition, that is only a drop in the bucket. To realize a series of industry and infrastructure milestones, Moscow needs to attract as much as US$143 billion in private investments to the region over the next 10 years.

To do so, Moscow is considering offering two thirds tax exemptions to investing companies.

Amid poor relations with the West and confrontation with the US, Russia is looking to China as the key partner. In 2016, the Chinese government provided a $12 billion loan to help Russian gas giant Novatek, which had been battered by Western sanctions, to launch an ambitious liquefied natural gas plant in Siberia’s Yamal Peninsula.

Since operations started in late 2017, the Yamal LNG plant has been shipping liquefied gas to Europe and Asia through the NRS. Another plant, Arctic LNG 2, is expected to start activity in 2023 with Chinese participation.

According to a policy paper published last year, China is interested in integrating the Northern Sea Route into its globe-spanning Belt and Road Initiative.

However, the competition to control the Arctic and its resources risk turning the region into a hotbed of military confrontation.

Russia has been upgrading Soviet-era military bases along the NSR, installing air defense systems and anti-ship missile launchers. Moscow’s Northern Fleet – the largest among Russia’s four fleets – has been fully modernized and exercises regularly in the region.

The US is also an Arctic nation and as Pompeo indicated at the Arctic Council, the US won’t leave Russia’s claims in the region unchallenged. Washington is already planning to expand related Coast Guard operations and ramp up its icebreaker fleet.

According to Russian military analyst Pavel Felgenhauer, risks abound in the NSR.

“It is typical for Russia to set its own rules, which means interpreting the rules of international navigation in its favor, and then punish others for non-compliance with these rules,” he said.

Felgenhauer drew a parallel with Russia’s recent actions in the Sea of Azov, where last November transiting Ukrainian vessels were seized by the Russian military for allegedly violating Russia’s national waters.

But conflict is not inevitable. Mikaa Mered, professor of Arctic and Antarctic geopolitics at the ILERI School of International Relations, believes the chances of a military confrontation between Russia and the US in the Arctic are close to zero. Mered points out that most Arctic resources are clearly located within the undisputed economic zones of the respective Arctic countries, reducing risks of a resource war.

And both Washington and Moscow seek regional stability. “Neither the US nor Russia have an interest in creating security risks in the Arctic that would drive investors away,” Mered told Asia Times.