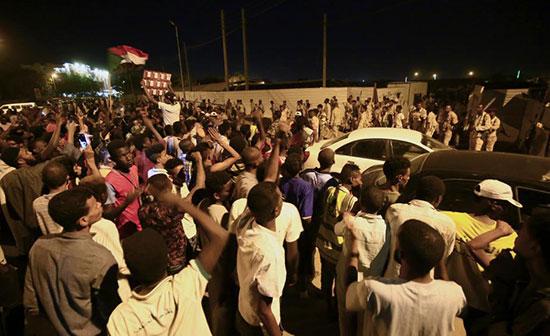 A handful of Sudanese protesters have died in Sudan’s capital Khartoum, AFP news agency reported, only hours after the country’s ruling military council and political opposition said they had reached a political transition agreement.

The violence broke out late on Monday at a protest sit-in across from the country’s military headquarters.

Dozens of protesters were injured in the incident, including some who were carried away on stretchers towards medical aid throughout the evening on Monday.

Some of the protesters appeared to have been struck by live ammunition, while several soldiers were also injured.

It also was not immediately clear who was responsible for the shootings.

The TMC blamed the violence on armed groups unhappy with the progress of the country’s political transition, Reuters said.

The shootings come amid heightened tensions in Khartoum, where protesters have staged a sit-in opposite the country’s military headquarters for more than a month.

The protest encampment was set up a few days before Bashir was deposed in a military coup on 11 April. Bashir was forced out after months of protests across Sudan calling for his resignation.

The protesters stayed at the sit-in after Bashir was deposed, and they are urging Sudan’s military leaders to hand control of the country over to a civilian-led, interim body.

But as negotiations over Sudan’s political future continue without a clear way forward agreed to by all the parties, tensions have escalated in Khartoum.

Earlier on Monday, pick-up trucks used by Sudan’s various armed forces fanned out across the capital and blocked major roads.

Amid the rising tensions, a TMC spokesman during the day on Monday announced that a deal had been reached with opposition groups regarding the way forward in Sudan.

“We discussed the structure of the transitional authority and agreed on it completely, and we also agreed on the system of governance in the transitional period,” Lieutenant General Shams al-Din Kabbashi said, as reported by Reuters.

Another round of meetings has been set for Tuesday.

The protesters have insisted that Sudanese military officials must step aside, and last week, protest leaders called for “civil disobedience” to put more pressure on the army.

While many protesters have remained at the central Khartoum sit-in, demonstrations have also spread to other parts of the capital.