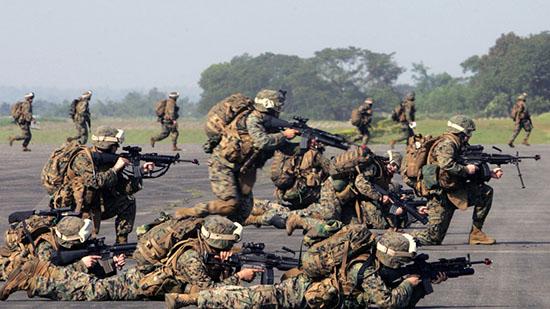 Donald Trump has reportedly been presented with a plan to send as many as 120,000 troops to the Middle East to counter the so-called Iranian threat, the New York Times reported.

Several options to tackle Tehran in the region were outlined to the president during the briefing, while “the uppermost option called for deploying 120,000 troops, which would take weeks or months to complete,” the Times said.

While the revisions “ordered” by “hard-liners” do not promulgate a land invasion of Iran, “the development reflects the influence of Mr. Bolton, one of the administration’s most virulent Iran hawks,” The Times reported. Bolton has been a long-time advocate of using military force against Tehran, even penning an op-ed in 2015 titled “Top Stop Iran’s Bomb, Bomb Iran.”

The proposal to send additional reinforcements comes amid accusations from Secretary of State Mike Pompeo that Tehran has been engaging in “an escalating series of threatening actions and statements in recent weeks.” To counter the unspecified threat, the Pentagon has already deployed the USS ‘Abraham Lincoln’ carrier strike group and bomber task force, including B-52s, to the region.

The deployment came exactly a year after Washington unilaterally withdrew from the 2015 Iran nuclear deal (JCPOA), and renewed sanctions against the Islamic Republic’s financial, oil and banking sectors. The US has also labeled Iran’s elite Revolutionary Guards Corps a “terrorist organization,” triggering a tit-for-tat response from Tehran.

Meanwhile, Iran said it will cancel part of its obligations under the nuclear agreement, and urged the European signatories to tackle Washington’s pressure.

The US sabre rattling is “attempting to magnify the shadow of war,” Rear Admiral Hossein Khanzadi explained on Sunday night, noting that American military buildup in the region is “theatrical and useless.”