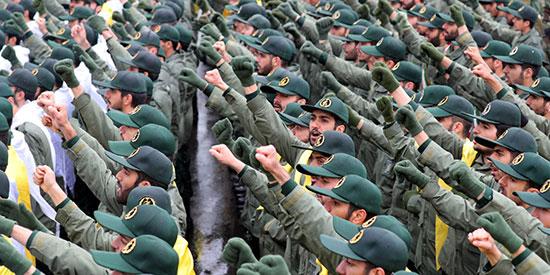 The US’ economic sanctions appear to be taking a toll on Iran as an increasing number of EU nations are beginning to comply with Washington’s policy of economically isolating the Islamic Republic in an effort to halt Tehran’s aggressive policies in the Middle East and its support for terror organisations.

US Secretary of State Mike Pompeo and White House National Security Adviser John Bolton believe that Iran appears to be preparing for launching a series of attacks against US troops and other interests in the region in retaliation for the White House’s decision to classify Iran’s hardline Islamic Revolutionary Guard Corps as a terrorist group alongside ISIS, Hamas, and al-Qiada, as well as its closest  ideological and sectarian ally, Hezbollah in Lebanon.

The US has over 5,000 troops in Iraq and hundreds in Syria and has also deployed the aircraft carrier USS Lincoln to the Near East theatre of operations in to counter the threat “posed by Iranian regime forces”.

The Islamic Revolutionary Guard Corps, or IRGC, has been actively spearheading Tehran’s support for Shia militants in Syria, Lebanon, Iraq, and Yemen through its elite and highly secretive Quds Force. In Iraq, the Quds Force has been the driving force for the Shia Popular Mobilisation Units that boast more than 100,000 fighters and is widely credited with halting ISIS’ attempt to capture the Iraqi capital Baghdad in 2014. The Mobilisation Units’ political wing, Fatah, is a decidedly pro-Iranian member of the governing coalition in Iraq and holds a majority in parliament.

The IRGC is the main power base in Iran outside of the hardline clergy that dominates both domestic and foreign policy. Since its creation by Ayatollah Khomenei in 1979, the IRGC has manoeuvred itself into a position where it now controls most of Iran’s lucrative state businesses, including the energy industry, as well as the Islamic Republic’s intelligence services.

Sanctions raise the stakes in Tehran

With the US’ European allies moving closer to full compliance with the sanctions as companies from all over the bloc shut down their Iranian-based businesses in order to comply with the current embargo. Angered by this prospect, hardliners in the Iranian government who vehemently opposed the landmark 2015 nuclear deal warned Germany, the UK, France, and Iran’s close allies – China and Russia – a 60-day deadline to pledge to protect Iran’s oil and banking sectors or Tehran will abandon its 2015 commitments.

Iran’s countermeasures could include the use of new generation IR4 and IR2M centrifuges or storing the heavy water required for nuclear fission which can then be enriched for weapons-grade plutonium.

Pompeo has argued that the administration’s attempt to squeeze Tehran is “aimed at cutting off the funding for terrorists and it’s working.” In a press briefing, the American Special Representative for Iran and Senior Policy Advisor to the Secretary of State Brian Hook noted that Iran’s oil exports stand at historic lows as the US has stopped issuing waivers to countries who import Iranian oil.

Hook noted that Washington is “making Iran’s foreign policy prohibitively expensive” by directly linking Tehran’s ability to fund its military capacities to sanctions that cripple its expansionist policies in the wider Middle East. Since the sanctions were introduced, the Iranian government was forced to cut its military budget by 28%, including a major 17% haircut to the IRGC’s operational funding. The International Monetary Fund (IMF) projects a 6% contraction for Iran’s economy in 2019, as oil revenue shrinks and foreign investors flee.

Though Germany, France, and the UK remain committed to the 2015 Joint Comprehensive Plan of Action – the Iran nuclear deal –  Tehran is hoping to cause friction between the Western partners in the hope that it can pressure Europe to forcefully deviate from the US’ policy of imposing and enforcing sanctions.

“We think the ideal course is that every nation joins the sanctions regime that exists today,” Pompeo said during a 20-minute speech in London on 9 May, adding, “Denying Iran the wealth to continue its ballistic missile testing and its nuclear programme is a good thing.”

“Our sanctions give European countries a choice, and it’s a choice they can freely make,” Hook said, “They can either have access to the US markets and the American financial system, or they can do business with Iran. That’s not a difficult decision given the relative size of the American market over Tehran’s.”

The UK’s Foreign Secretary Jeremy Hunt warned Tehran of “consequences” should Iran renege on the deal. He did say, however, that Britain and the EU-27 would still stand by the deal so long as the Islamic Republic remained in compliance with all of the agreement’s commitments. France later echoed Hunt’s comments and added that full international sanctions could be reimposed if Tehran opts to pull out of the accord.

The EU’s foreign policy chief, Federica Mogherini, expressed “regret” for the US sanctions, but made clear that they reject “any ultimatums” by Iran.

Brussels’ typically muddled and ambiguous comments came before two Saudi oil tankers were attacked in the Persian Gulf on 13 May, just off the coast of the United Arab Emirates. The sabotage attacks are believed to have been carried out by one of Iran’s regional paramilitary proxies. The incident is thought to have been tied to the US’ decision to move an aircraft carrier group into the Gulf.

The deployment has been met with thinly veiled threats from Tehran, who said the increased number of American military personnel in the region represented a “target” and an “opportunity” for the Revolutionary Guard to strike out at US interests in the Middle East.